Coming this week to a theatre near you:

Captain Jack Sparrow (Johnny Depp) is back and so is his old nemesis, Captain Salazar (Javier Bardem) who has escaped from the Devils Triangle and is determined to kill every pirate at sea.  Captain Jack's only hope is to find the legendary Trident of Poseidon, which will help him defeat Salazar. Pirates of the Caribbean: Dead Men Tell No Tales Website

What to Watch For:  Orlando Bloom and Keira Knightley will be making appearances in the film.

Word on the Street:  To promote the movie, Johnny Depp has been making appearances dressed as Captain Jack.

My Take:  Screenwriter Jeff Nathanson wrote one of my favorite films, Catch Me If You Can (2002).

The film opens at Atlanta area theatres on Friday. 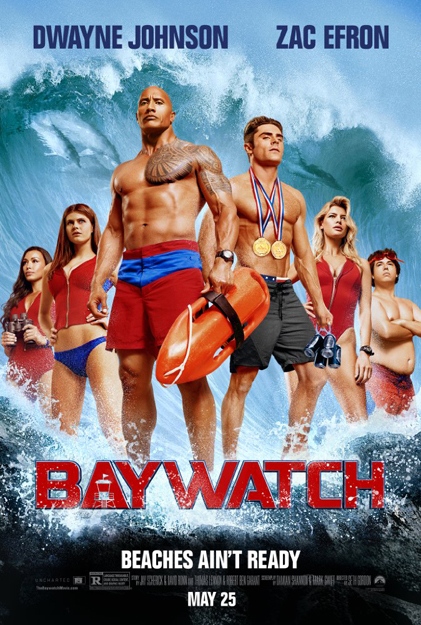 Lifeguard Mitch Buchanan (Dwayne Johnson) is known for running the beach his way. He is being challenged by a brash new lifeguard (Zac Efron) and a new threat of a local criminal plot that threatens the future of the Bay. Baywatch Website

What to Watch For:  The film was shot in Savannah, Georgia.

Word on the Street:  Stars of the old TV series, David Hasselhoff, and Pamela Anderson will be making cameo appearances in the film.

My Take:  I hear there are a number of other cameos in the film.

The film opens in Atlanta area theatres on Thursday.

Michal (Noa Koler) fiancé leaves her on the eve of their wedding.  Michal refuses to cancel the wedding, convinced that God will supply her a husband, but the clock is ticking. The Wedding Plan Website

What to Watch For:  The film won six awards from the Israeli Film Academy including Best Film.

Word on the Street:  Writer/Director Rama Burshtein is best known for her award-winning film Fill the Void  (2012).

The true story of Olli Maki (Vanha Pariskunta), the famous Finnish boxer who had a shot at the 1962 World Featherweight title. The Happiest Day in the Life of Olli Mäki Info

What to Watch For:  The film won the Un Certain Regard Award at the 2016 Cannes Film Festival.

Word on the Street:  The film won eight awards at the Jussi Awards (the Finnish Academy Awards).

My Take: I am hearing from other film critics that this is sure to be up for the Foreign Film Academy Award at next year's Oscars.

If you can't make it to the theater this weekend, then stay at home and watch movies on Atlanta's CW:

A Knight's Tale  (2001) A lowly squire (Heath Ledger) longs for a better life.  When his master dies, he decides, with the help of his friends, to re-create himself as a knight. But now he must prove that he is worthy of the title and the love of a woman.

Crazy Heart  (2009)  A faded country music musician (Jeff Bridges) is forced to reassess his life during a romance with a woman (Maggie Gyllenhaal) who will change his life.

A Knight's Tale  (2001) A lowly squire (Heath Ledger) longs for a better life.  When his master dies, he decides, with the help of his friends, to re-create himself as a knight. But now he must prove that he is worthy of the title and the love of a woman.