An American couple (Owen Wilson, Lake Bell) and their kids are caught in the middle of a coup in a Southeast Asian country. Now they must try and make it from their hotel to the American Embassy, running from a crowd hell-bent on executing every foreigner they find. "No Escape" Facebook Page

What to Watch For:  The film was shot in Thailand to make it look authentic.

Word on the Street:  The film has been banned in Cambodia due to lettering that was used on some of the police shields in the film. The government felt it promoted the Khmer .

My Take:  It will be interesting to see Lake Bell in a big Hollywood film. She is usually in smaller, Indie films.

Tracy (Lola Kirkel), a college freshman, is not ready for her stepsister Brooke (Greta Gerwig), who is going to turn Tracy's life upside down. "Mistress America" Website

What to Watch For:  The film was directed by Noah Baumbach ( Frances Ha, While We're Young).  Baumbach co-wrote the script with the film's star Gerwig.

Word on the Street:  Critics are raving about Gerwig's performance.

My Take:  I will go see any film Baumbach makes.  He is one of my favorite directors.

Cole (Zac Efron) is a struggling DJ with dreams of becoming a record producer. He meets DJ James (Wes Bentley) who takes an interest in Cole, helping him learn the business. When Sophie (Emily Ratajkowski), James' old girlfriend, starts dating Cole, he will have to choose between love and business. "We Are Your Friends" Website

What to Watch For:  Ratajkowski became famous when she appeared in Robin Thicke's "Blurred Lines" music video.

Word on the Street:  Efron took lessons on how to be a DJ from Alesso, one of the biggest DJ's out there.

My Take:  I first noticed Emily Rataikowski when she played Ben Affleck's mistress in "Gone Girl." 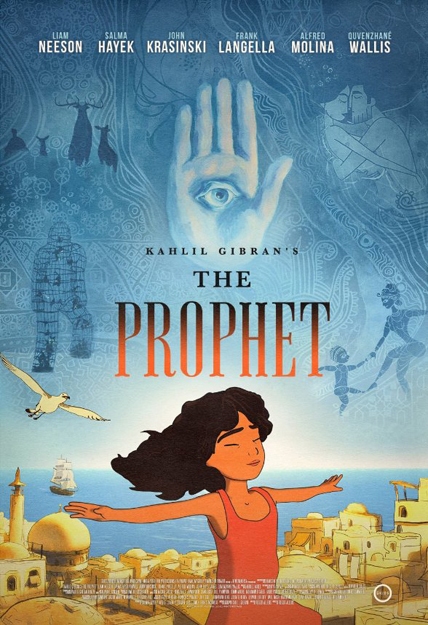 Mustafa (Liam Neeson) is a poet who has been banned from his home country because the authorities believe his words will incite rebellion. He goes back home to find his love Kamila (Salma Hayek) and her daughter Elmira (Quvenzhane Wallis).  Will they escape before the authorities find Mustafa? "The Prophet" Website

Word on the Street:  The film is based on the works of Lebanese artist, philosopher and writer Kahlil Gibran.

My Take:  I have wanted to see this film since it premiered at the 2014 Toronto International Film Festival.

Word on the Street:  The film has been a big hit on the festival circuit.

My Take:  The film is directed by Joe Swanberg, who directed one of my favorite films from 2013, "Drinking Buddies."

If you can't make it to the movie theatre this weekend, then stay home and watch movies on Atlanta's CW.

"Blue Thunder"  (1983)  A cop test pilot (Roy Scheider) begins flying an experimental police helicopter when he learns that the copter may be used for sinister.

"Live Free or Die Hard" (2007)  John McClane (Bruce Willis) and a young hacker (Justin Long) team up to try and bring down a cyber-terrorist (Timothy Olyphant).

For more of Mike's reviews and inteviews click here