Peter Quill (Chris Pratt) is a thief who goes by the name, Star-Lord, and who travels through the Galaxy stealing objects for a group of smugglers called, the Ravagers. After stealing an orb, he discovers that everyone in the Galaxy wants the orb due to its immense power.  Now, he must team up with some fellow misfits to keep the orb from the evil Ronan (Lee Pace). "Guardians of the Galaxy" Website

What to Watch For:  The rest of the Guardians consist of Rocket (Bradley Cooper), a genetically engineered raccoon, Groot (Vin Diesel), a tree-like humanoid, Drax the Destroyer (Dave Bautista), a warrior of immense size and strength, and Gamora (Zoe Saldana), the ultimate warrior and the last of her kind.

Word on the Street:  Critics from early screenings says that Groot, the tree-like warrior voiced by Vin Deisel, is the character that audiences will fall in love with and will steal the movie.

My Take: This could be another big "franchise film" for Marvel. 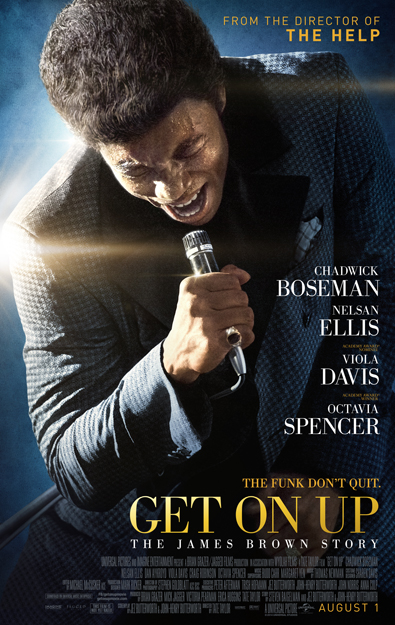 The story of James Brown (Chadwick Boseman), from his rise from poverty to one of the biggest icons in the music world. "Get On Up" Website

What to Watch For: Chadwick Boseman has the thankless job of playing the legendary, "Godfather of Soul," but Boseman has already played a legendary figure on film, the groundbreaking baseball player, Jackie Robinson in "42."

Word on the Street:  The film was shot in Mississippi and Atlanta.  It's said that the musical numbers are going to make or break this film.

My Take:  I want to see the CW's "Tomorrow People's" Nick Eversman portray Mick Jaggar in the film.

We watch  Mason, Jr. (Ellar Coltrane) grow up from age 6 to age 18 as he experiences the trials and tribulations of a son from a broken marriage. "Boyhood" Website

What to Watch For:  The film, written and directed by Richard Linklater, was shot over twelve years using the same actors for each principal role.  This allows the audience to see each character grow older without having to use different actors. The film is the hit of the Film Festival circuit.

Word on the Street:  The film is already being talked about as the leader at the Academy Awards, including Best Picture.

My Take:  This is a film everyone will want to see. I am predicting that this film will break box office records on the "Art House / Indie" level.

Twenty-something Jenny (Anna Kendrick) arrives at her brother's house with bag in-hand and no idea how long she will stay.  Her brother, Jeff (Joe Swanberg), is a filmmaker married to his novelist wife, Kelly (Melanie Lynskey).  The idea is that Jenny can live with them for a while if she helps care for Jeff and Kelly's two year old son.  The question is, can Jenny be trusted with that much responsibility? "Happy Christmas" Website

What to Watch For:  The film was directed by Joe Swanberg who is known for his allowing his actors to improvise their dialogue.

Word on the Street:  Critics and audiences are excited to see this film, especially after the success of Swanberg's  2013 film, "Drinking Buddies" that also starred Kendrick.

My Take: This is one of the few films that  allowed Melanie Lynskey (Two and Half Men) to use her native New Zealand accent.

If you can't make it to the theatre this weekend, stay at home at watch films on CW69.

"What Happens in Vegas"  (2008)  Living in Las Vegas can have its hazards.  Following a night of drinking, Joy (Cameron Diaz) and Jack (Ashton Kutcher) not only discover that they got married, but they also learn as man and wife that they won a huge jackpot. Now, will they survive each other's company long enough to enjoy the money?

"The Thing About My Folks"  (2005)  Sam's (Peter Falk) wife of 46 years has left him.  Sam's son, Ben (Paul Reiser) decides to take his dad on a road trip to reconnect and maybe figure out where Sam can go from here.

"Kiss of the Dragon"  (2001)  Lui Jian (Jet Li) is a police officer from China trying to bring back a Chinese drug lord from Paris. He enlists a hooker (Bridget Fonda) to help him navigate the backwaters of the Paris night life.

"Seven Pounds"   (2007)  Ben (Will Smith) has a terrible secret. He sets about to redeem himself by finding seven strangers and change their lives.  By affecting their lives, he might just change himself.