After Newt Scamander (Eddie Redmayne) help apprehend the dark wizard Gellert Grindelwald (Johnny Depp), Grindelwald makes good on his promise and escapes. Grindelwald sets about to find followers in his plot to take over the world from all non-magical beings. Albus Dumbledore (Jude Law) convinces Newt to take on Grindelwald once again. Fantastic Beasts: The Crimes of Grindewald Website

What to Watch For: This is the 2nd installment of the Wizarding World franchise and the tenth in the Harry Potter world.

Word on the Street: The screenplay is written by J.K. Rowling, who wrote the famous Harry Potter books.

My Take: I enjoyed the first Fantastic Beasts film, so I am looking forward to this one.

The film opens nationwide on Friday. 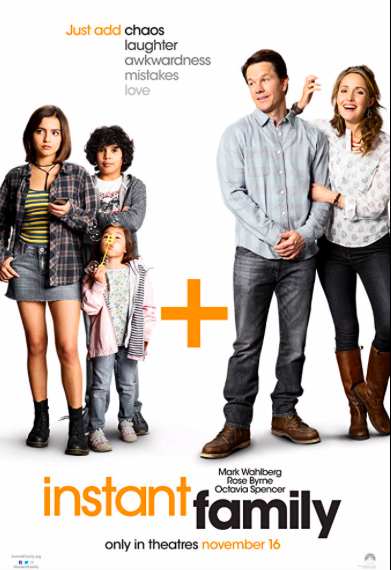 A couple (Mark Wahlberg, Rose Byrne) want to adopt and fall in love with an adorable kid. To their surprise, if they want that child, they have to adopt the kids two siblings. Can the couple survive this 'Instant Family?' Instant Family Website

What to Watch For: The film is inspired by the true life experiences of writer/director Sean Anders.

My Take: The film has an outstanding cast including Octavia Spencer, Tig Notaro, Michael O'Keefe and Joan Cusack.

The film opens nationwide on Friday.

Their husbands have died in a botched heist, and a drug lord is demanding the money that was stolen from him, three of the widows plan to rob a local politician. Widows Website

What to Watch For: The film is written and directed by Academy Award-winning Steve McQueen.

Word on the Street: The film is based on a British TV program from the 80s.

My Take: I find it interesting that Rober Duvall and Colin Farrell, playing father and son, improvised most of their dialogue in their scenes together.

The film opens Nationwide on Friday.

An anthology film comprised of six stories taking place in the old west. The Ballad of Buster Scruggs Website

What to Watch For: The film won Best Screenplay and was nominated for Best Film at the 2018 Venice Film Festival.

My Take: I always enjoy an Ethan and Joel Coen film.

The film opens in select theatres and on Netflix on Friday.

One of the greatest war correspondents of our time, Marie Colvin (Rosamund Pike) is devoted to getting the story at all costs. A Private War Website

What to Watch For: The film is based on a true story.

Word on the Street: Some film critics feel that Pike could be an Academy Award nomination for the role.

My Take: The film is directed by Matthew Heineman, who directed the brilliant documentaries Cartel Land (2015) and City of Ghosts (2017).

The film opens in Atlanta area theatres on Friday.

American Senator Gary Hart (Hugh Jackman) was in the driver's seat for the Democratic nominee for President in 1988. His career and campaign are ruined when it's discovered that he has been having a scandalous love affair. The Front Runner Website

What to Watch For: The film is directed by Jason Reitman, a four-time Oscar nominee.

Word on the Street: This is one of the most anticipated films of the year.

My Take: Vera Farmiga, who plays Hart's wife, is one of my favorite actresses.

What to Watch For: The title of the film comes from 'The Green Book' a segregation-era road travel guidebook to help African-Americans find food and lodging in the South.

Word on the Street: Director Peter Farrelly is known for directing Dumb and Dumber (1994), and There's Something About Mary (1998).

My Take: The film is based on a true story, and the script was co-written by Tony Lip's son.

Gary Winogrand: All Things are Photographable (2018)

Gary Winogrand was an iconic photographer who worked over the course of three turbulent decades of the 20th century. Gary Winogrand Website

What to Watch For: The film uses photographs, home movies and newly discovered audio tapes to illustrate the photographers work and life.

Word on the Street: The film won the Special Jury Prize at the 2018 SXSW Film Festival.

My Take: I always enjoy documentaries on photographers.