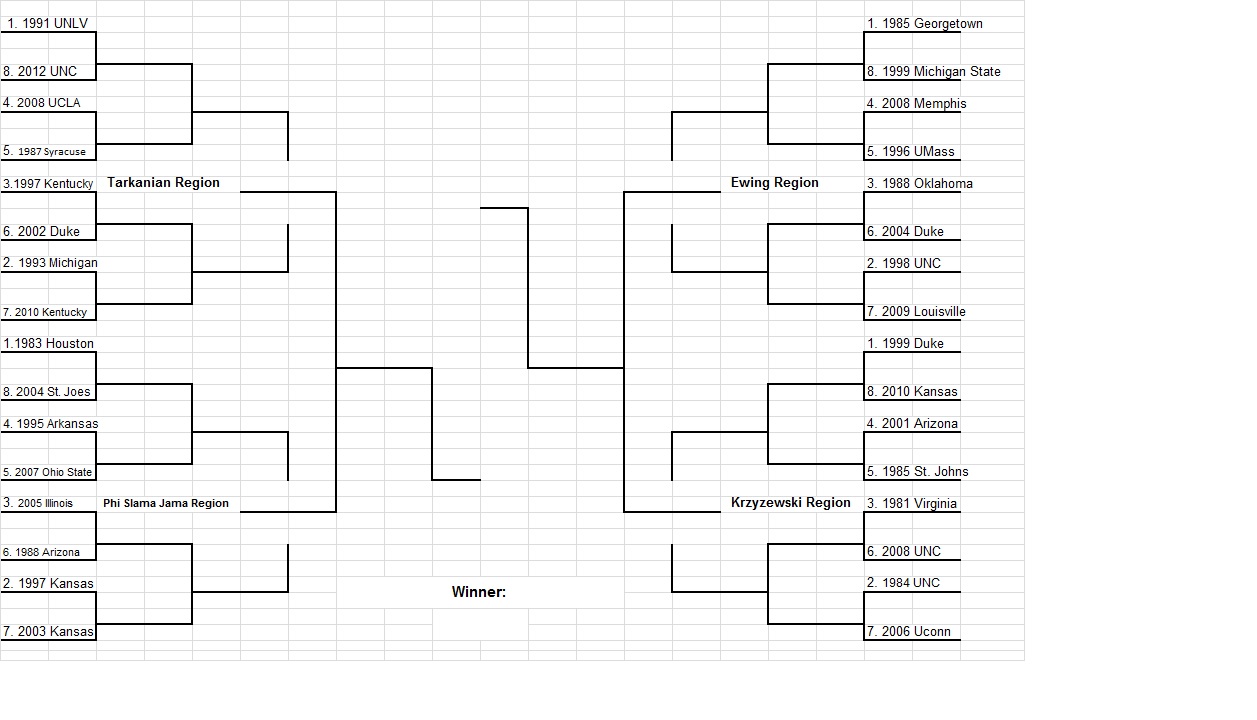 Sports history is full dominate teams such as the 1995 Cleveland Indians and 2007 New England Patriots whose monumental seasons ended without a championship banner to hang following year. More often than not the favorite doesn't take home to the title, nonetheless that doesn't take away from what might have been a great season.

The 75-year history of the NCAA Tournament includes memorable teams that came up just short of cutting down the nets. Tune in to 92.9 The Game tonight from 3am-6am as Duane Walker and Harper LaBel breakdown a 32-team bracket of best college basketball teams since 1980 that didn't win the Final Four. Here's a preview of the first round matchups in this bracket for the ages.

Here's a breakdown of how these 32 teams fared in the NCAA Tournament.

Lost in the Elite Eight: 7

Lost in the Sweet Sixteen: 1

Lost in the Second Round: 1

Last year's North Carolina team that had four-first round picks in its lineup takes on a Runnin' Rebels squad that came up just two games short of a perfect season.

Chris Webber and the sophomore-Fab Five meets John Wall and the highly touted recruiting class that made up John Calipari's first team from Lexington.

Two historic programs with teams that came up just short of repeating as national champions face off in round one.

Freshman stars Kevin Love and Derrick Coleman will be facing each other in the post, while the backcourt will feature a sophomore showdown between Russel Westbrook and Sherman Douglas.

Texas's tallest fraternity opens their tournament slate against a Redhawks team that went unbeaten in the regular season with a backcourt of Naismith-winner Jameer Nelson and Delonte West .

Arguably the best teams Roy Williams ever coached in Lawrence face off in the opening round. Paul Pierce leads the way for the 1997 squad while the 2003 title game runner-ups are anchored by Nick Collison and Kirk Hinrich.

The three-guard lineup of Dee Brown, Luther Head, and Deron Williams leads the way for the Fighting Illini who began the year 29-0 and finished the season 37-2, after losing to North Carolina in the championship game. Arizona's backcourt is equally intriguing with the likes of Sean Elliot, Steve Kerr, and Kenny Lofton.

The defending national champion-Razorbacks begin their tournament against a Buckeyes team anchored by freshman-center Greg Oden.

Patrick Ewing's Hoyas faceoff with the first of Tom Izzo's six teams from East Lansing that made the Final Four.

Vince Carter and Antwan Jamision lead the Tar Heels against a Louisville squad that was the top overall seed in their tournament after winning a competitive Big East tournament.

Marcus Camby and Derrick Rose lead the way for the two most successful teams that John Calipari had coached prior to his days in Lexington.

The 1999 edition of Coach K's Blue Devils finished the season 37-2 and included five future top-14 NBA draft picks, falling just short of the national title in a 77-74 loss to UConn. Their opponent is an equally talented Jayhwks squad with as many as nine future NBA players.

Although the 1982 Tar Heels were national champions, some think the 1984 team was even better with Michael Jordan and Sam Perkins as upperclassmen, being joined by Kenny Smith and Brad Daugherty. That would be quite the matchup for a Huskies team that famously lost to George Mason in the 2006 Elite Eight.

ACC legends Ralph Sampson and Tyler Hansbrough battle as juniors in this opening round showdown.