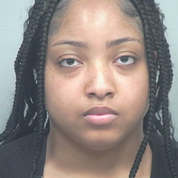 GRAYSON, Ga. (CW69 News at 10) – A Loganville teenager has been charged with second degree homicide by vehicle and failure to yield in a July 4th traffic accident that led to the death of a Loganville man according to a Gwinnett County Police Department statement.

Aaliyah Ritchie (age 18, Loganville) was booked into the Gwinnett County Jail on July 24 and has since bonded out.

The GCPD said in a statement that on Saturday, July 4, a motorcycle with two occupants and an SUV collided at the intersection of GA-20 and Rosebud Road in Grayson.  The occupants of the motorcycle were both ejected and were eventually transported to a local hospital to be treated for their injuries.

The investigation is still active.