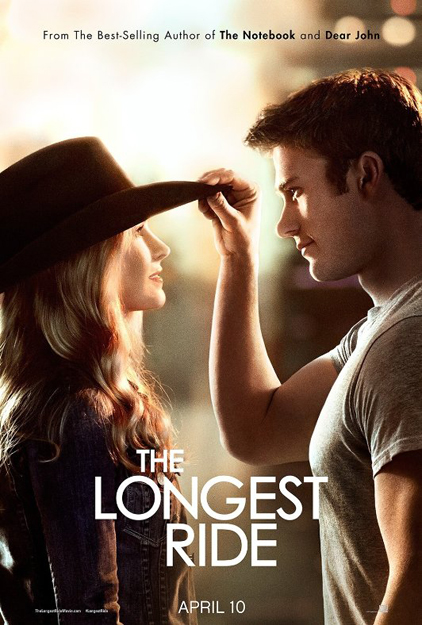 Luke (Scott Eastwood) is a professional bull rider who is trying to make a comeback and make it to the PBR (Professional Bull Riders) finals. Sophia (Britt Robertson) is an art major who is about to graduate and do an internship at a New York City art gallery. They meet and start dating but only after encountering an old man (Alan Alda) who they rescue from a car accident. Now their interaction with him will change their lives forever.

I participated in a roundtable interview with Britt Robertson, Scott Eastwood and author Nicholas Sparks, whose best selling book, the film is based on.

Hi guys, welcome to Atlanta!  So Scott, were you a fan of bull riding before making the film?

Scott Eastwood: One of the reasons I was drawn to the role was because of that. My agent called and said "You want to play a bull rider?" And I said, "Hell yeah I'll play a blurred!" I was a big fan of the PBR. Even as a little kid I was a fan. Some of my fondest memories are watching bull riding.

You mentioned last night at the screening that you went and tried bullring on your own. How long did you stay on?

Scott: Two and half seconds.

Nicholas Sparks: A long two and half seconds.

Scott: Yeah, a long two and half seconds.

Nicholas, this is your tenth movie to be made from one of your books. How much are you involved with making the films?

Nicholas: Well, for this one I produced it. Behind the scenes, I primarily work with the studio, interviewing and hiring the screenwriter. Also interview and hire the director. We then we hire a producer who works with the studio to make the film. I then go and scout locations and set up a budget for the film. My work is generally done before the first day of shooting. I do go on the set every day and also watch the dailies.

So you were very involved with this film.

Nicholas: Yeah, I was, and it was great.

Britt, did you read the book?

Nicholas: Yeah, I want to add to that. Not every actor wants to read the book. Remember that they are doing a completely different medium. Reading the book might give them some insight into the character and maybe create some authenticity to the role. But I don't require that they read the books.

I know that you shot some of your film "The Last Song" here in Georgia.

Nicholas: Yeah, we did.

With all the tax cuts, they are making with the film industry in North Carolina, does that mean that you will be looking to Georgia to film in?

Nicholas: It's a strong possibility. Georgia and Louisiana are our best candidates for states to film in next. Louisiana has some coastline that looks almost exactly like parts of North Carolina. It will depend on what kind of film it is and what locations we are trying to recreate.

Britt: Yeah, like the locations for "The Best of Me" were gorgeous.

Nicholas: And they looked exactly like North Carolina but were shot in Louisiana.

Britt: I didn't realize that, but I was blown away by it. So gorgeous.

What parallels did you find between yourself and Sophia? Did you have any interest in art? Did you have to do a lot of research for the role?

Britt: I have always been interested in art but had no formal training or experience. It's always been just what I liked, my eye for art. I have two pieces of art in my house that were created by Jack Binder. I got them around the time that we shot this movie, so I think I was a little inspired by it. I actually wanted to take some of the paintings home that are in the film. I did a lot of research into the art world for the role, working with a woman at UNCW. She was able to go over a lot of things that my character would have been studying. I did some research to make sure, like Nick said, to make sure it was authentic, making sure that I knew about what she was experiencing and knew her passions.

Scott, last night at the screening, you talked that this movie isn't just for female fans that guys are going to enjoy this movie. The rodeo scenes in the film seem authentic and well done.

Scott: Thanks, glad to here that. Yeah, my particular taste in movies is "guy movies." So when I read the script and I knew that George Tillman Jr. was going to direct the film. I thought that this could be a cool movie. I thought that George could bring a real grittiness and bridge the gap. I thought "The Notebook" has some grittiness to it, that guys ultimately liking and besides it was a pretty damn good movie. To have the bull riding, and the grit to this film was a big aspect for me.

So was there a scene for each of you where for the first time you really clicked with your character?

Britt: The gallery scenes is where it clicked for me. The day before we shot the gallery scenes, they brought me some new material where I was going to have to talk about some paintings to a man. The monologue was so incredibly long and while it was stuff that I had researched, but to have to memorize all this information and be passionate about it was so challenging. I worked hard on the monologue, and it ended up not being in the movie. So the scene that got cut was where I thought, I think I have this.

Scott: I think I got when I was shooting the bull riding sequences with the PBR guys. I had done quite a bit of prep work, by going to Vegas and seeing the PBR events up close. And I went to some of the smaller events, so I was around it for a good length of time. So then when we went to shoot the bull riding scenes and the bulls were bucking in the chute, and they guys were sweating, that's when I felt like I was in sync with the role. At that point, I felt I was built for this, I was born for this role.

Many consider bull riders that last real cowboys. Giving that your dad played so many iconic western roles, did that help you with the role?

Scott: Yeah I think it did but mostly because I was brought up an outdoorsman. Because of that, I felt comfortable being in the bull riding world with the guys. I like to go horseback riding or go fishing on my dad's ranch in Northern California. Doing stuff like going salmon fishing every year with him allowed me to connect with the role before we even started shooting.

Talk about working with Alan Alda:

Britt: He is just as wonderful on film as he is in person. He is the best example of how to have a good career with a happy, personable life. He is so proud of his life, and his career, and you can just see it radiate it off of him. He has had such a full life and has so much more ahead of him. What's so inspiring to me about Alan is that he really makes the most of his time. He is willing to work his butt off on set but then take a plane right home so he can be with his wife. That is so incredible to make that effort in all aspects of his life.

What do you want for fans to take away from the film?

Well, thank you guys so much. Good luck with the film.