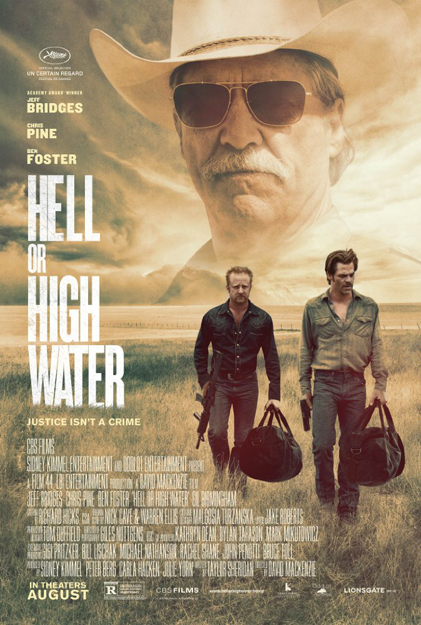 We see two men (Chris Evens, Ben Foster) driving in a beat up car down a dirty street full of billboards imploring to get the locals to solve their problems with a payday loan. When they pull black knit stocking caps over the heads and faces, we know that they are not up to any good. They wait on the side of a bank building until a woman begins to open the front door. They rush her, yelling commands for her to open the cash drawers and the safe. She tearfully tells them she can't; the bank manager has the only key to the safe. She tells them that he will be arriving shortly, and sure enough, they see an older man drive up to the bank and get out of his car. As soon as he gets inside, one of the bank robbers hits the man across the face with a gun. The manager opens the safe, and the robbers take only small bills with them, as they run out of the bank and back into their car. As the robbers make their getaway, they start celebrating, with the older one celebrating more than the younger one. It turns out the two men are brothers, discussing how the robbery wasn't as smooth as they wanted it to be.

Meanwhile, a crusty Texas Ranger named Marcus (Jeff Bridges), who is unmercifully ribbing his partner (Gil Birmingham), a man of mixed heritage of Native American and Hispanic. Most of the jokes play on the partner's Native American side and are quite racist. The two lawmen have been assigned to hunt down the two bank robbers.

The robbers drive to a second small town (which looks like the first one) and is more successful in robbing this bank, getting away with a lot more money. The two men head back home, parking the beat up car in a big whole and using a tractor, covering up the car with dirt. We learn that the two men are brothers. The oldest, Tanner, is an ex-con who has served time recently in jail. The younger man, Toby, is divorced and had taken care of his mother as she was dying from cancer. The mother had taken out a second mortgage to pay for her treatment. The family ranch is about to be foreclosed on by the bank, and the two brothers are trying to raise enough money to save the family farm and put it into a trust for Toby's sons. It's a plan that is sure to go down in flames, more than likely at the hands of the Texas Rangers hot on the trail of the two bank robbers.

Writer Taylor Sheridan (who wrote the excellent "Sicario') and director David Mackenzie have conceived a moving and exciting modern western set in the small towns of West Texas. The characters, even down to the smaller parts, like a grumpy old waitress, are rich and complex. Combined with Giles Nuttgens cinematography, the film looks as bleak and dusty as the people living in an economic landscape where banks rule people's lives, taking away land that has been part of generation after generation. These are desolate and grim times, even for Ranger Marcus, a widower who is weeks from a retirement that he is going to hate.

The backbone of this film are the performances by the main cast. Foster and Evans play off each other so well; it makes the idea that they are brothers easy to believe and even easier to understand their relationship and motives. Foster, bringing a menace and roughness to every scene, letting us know that his Tanner is at the end of his rope and has nothing to lose in trying to bring about Toby's plan. Evans, playing the quieter of the two brothers, gives off a steely resolve, letting us know that there is more to this cowboy than what is on the surface.

Jeff Bridges is scintillating to watch as he melds into the Texas Ranger that just might be hoping to go out in a flurry of bullets rather than fade away in retirement. Bridges fits into the role like the well-worn cowboy boots that his Texas Ranger character wears, making us believe he would rather sit outside with a blanket in the cold night air than lie on his warm bed. Not to be outdone, Gil Birmingham has the uneasy task of being on the receiving end of all the racist jokes that Bridges delivers, but Birmingham gives his portrayal of Ranger Alberto a feeling that for all that Marcus puts him through, he would stand by the man in any fight.

My favorite scene in the film sums up the movie. Tanner and Toby have bonded over this adventure as they discuss their future out on the land that they dearly love. As the sun sets, the two men start a wrestling duel that shows that the two brothers will always be family, no matter what is going to happen down the road. It's a journey that we hope they will survive and persevere.    My Rating: I Would Pay to See it Again

For more of Mike's reviews and interviews click here.

Full disclosure:  I am an employee of CBS Television Stations and the film is distributed by CBS Films, Inc.