Hopefully this will not become a recurring theme with the 2013 Atlanta Falcons. With Atlanta trailing by six with just 3:12 remaining in regulation, Matt Ryan was able to take the Falcons 77 yards down to the Saints three-yard line. On fourth and goal Ryan's intended pass to Tony Gonzalez was intercepted by Roman Harper to lock the game for the Saints. 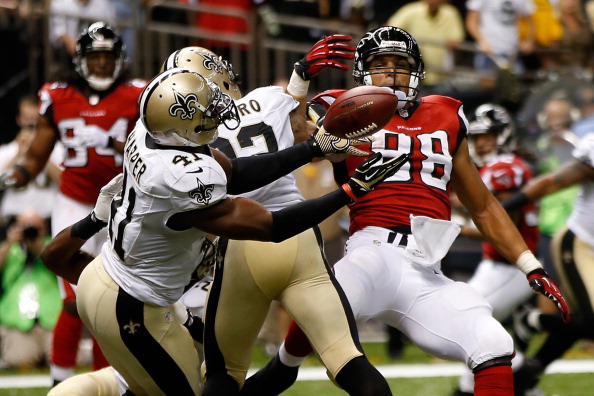 It's always tough to know what to expect for the season opener, especially when the first game is against a divisional rival. Even though the teams have been practicing together for more than a month, there is no substitute for game time experience. It was a decent game played by both teams, but in the end, New Orleans was able to make the most of Atlanta's turnovers, while Atlanta was unable to return the favor.

Rookie cornerback Robert Alford gets an A. Alford may have grown up a Saints fan in Hammond, Louisiana but in his first NFL game, the Southwestern Louisiana graduate did everything he could to give Atlanta chances to win. He only had one tackle but Alford also deflected a pass and came up with his first career interception in the third quarter.

Stephen Jackson and Harry Douglas: B+

Julio Jones may have led the Falcons in receptions but with just four catches, including a 50-yard reception in the first quarter, Douglas finished the game leading all players with 93 receiving yards, 17 more than Jones.

Jackson did his part as a dual-threat running back. On the ground Jackson picked up 77 rushing yards and grabbed five passes for 45 yards. His 122 total yards made up 33 percent of Atlanta's total offense. Not a bad way to debut for a new team.

Atlanta passing defense in general gets a C-. Drew Brees was able to throw for more than 350 yards, averaging 10.2 yards per pass and two touchdowns against Atlanta. Of the 18 first downs for the Saints, 17 were achieved through the air. Brees was not targeting any specific teammate during the game. Seven different Saints recorded at least two catches in the game

Atlanta will return to the Georgia Dome as they prepare to take on the St. Louis Rams next Sunday. Kickoff is 1:00 pm ET.

Matthew Asher is a freelance journalist. From an early age, sports have played a major role in his life. He graduated from Emory University with a B.A. in Journalism. After college he spent 2 years working with CNN Sports and still occasionally writes sports articles for several publications both in the United States and Canada. His work can be found on Examiner.com.