It was 2007 when I first met Al Horford, after the Hawks made him the third overall pick in that night's NBA Draft at New York's Madison Square Garden. The only other "Atlanta" representative in attendance was our beat writer, the Journal-Constitution's Sekou Smith, now of NBA Digital. Having attended both of Florida's Final Four championship finishes, in Indianapolis and Atlanta.

The Hawks were drafting in their highest position in two years when they picked North Carolina's Marvin Williams with the #2 overall selection in the Draft. Sekou and I debated several times on whether or not the Hawks were making the right choice in drafting Horford, and having watched him over his final two seasons - championship seasons - with the Florida Gators, I was adamant that the franchise needed a player with his skill set, and more importantly, a person who was capable of bringing a "winning mentality" to a club that hadn't made it to the playoffs since 1999.

I never pass up the chance to remind Sekou that he believed we should go a different direction with that pick... umm, what??!! Mike Conley?? No chance that would happen. Billy Knight infamously passed on BOTH Chris Paul and Deron Williams in 2005, and last I checked, Conley was still - in Knight's words - "a little point guard" - so that wasn't going to be the pick. Jeff Green, Yi Jianlian, or Horford's college teammate Corey Brewer - all of whom went picks #5 through #7... pffft. IT WAS THE RIGHT CHOICE, BABY.

We knew from the draft lottery we wouldn't be gaining the services of the two freshman college sensations - OSU's Greg Oden and Texas' Kevin Durant - but Horford's accomplishments with the Gators (two consecutive national championships) gave me the feeling we were about to turn the corner after years of postseason frustration that was difficult on everyone - owners, front office, players and fans.

That turn was immediate, as the Hawks proceeded to end their playoff drought, returning to postseason action in Horford's first season - falling short in a tremendous seven-game series loss to the eventual champion and hated Celtics - and in each of his nine years in Atlanta, the Hawks became the lead playoff returnee in the Eastern Conference. He outlasted everyone, the Mikes - Woodson and Bibby, the Joshes - Smith and Childress, and Marvin, Jamal, Zaza and most people's whipping boy, Johnson... Joe Johnson.

With Horford, the Hawks gained stability, a talent, and All-Star and ultimately, a winner who became the face of the franchise. 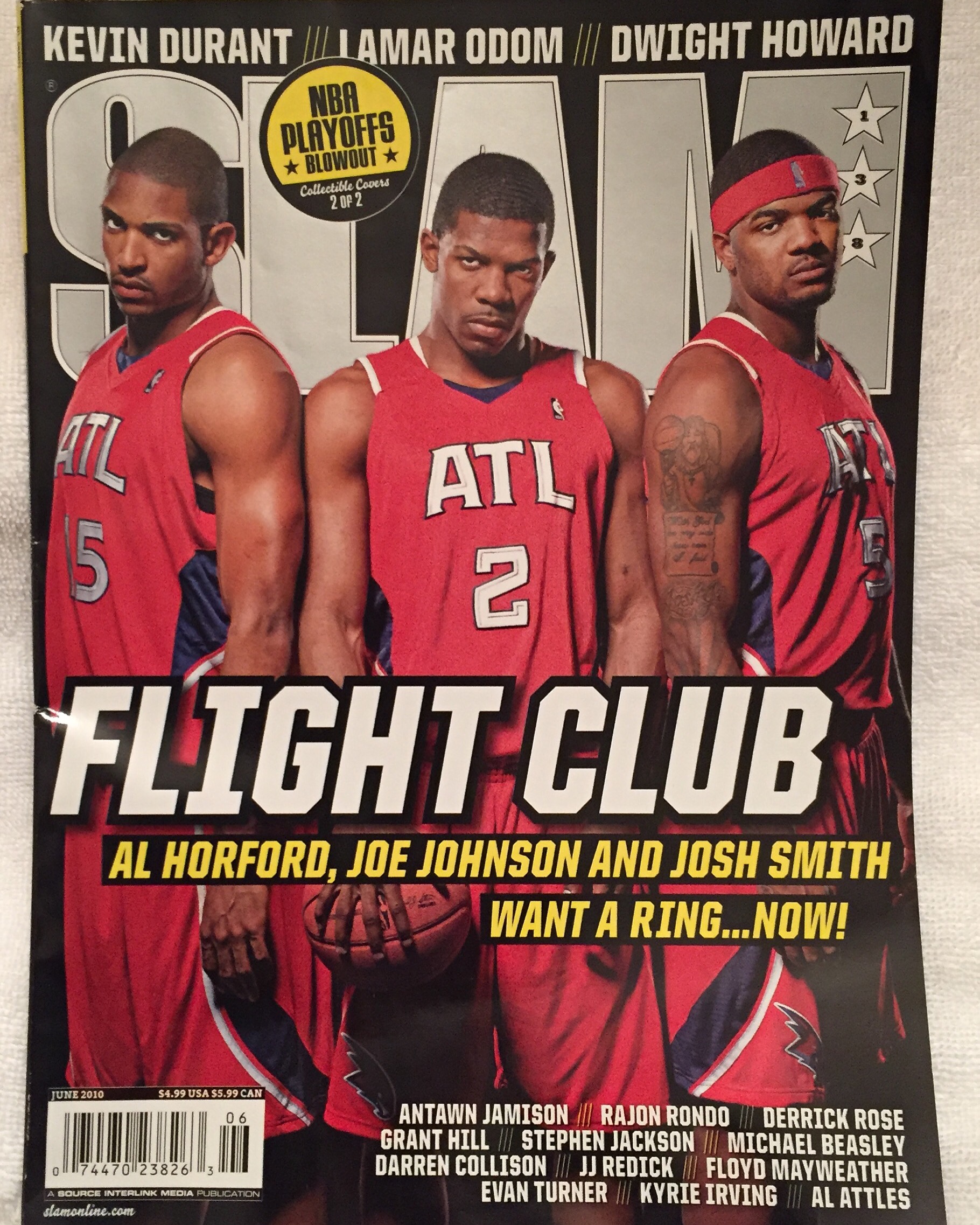 A season ago, everything went right for the Hawks. A 19-0 stretch that claimed the best month in NBA history in January 2015 with 17 straight wins (until it was surpassed this season by the Warriors' 24 in a row), four players making the Eastern Conference All-Star roster, a franchise record 60 victories and the Southeast Division title, and a first-ever appearance in the Eastern Conference finals. The future looked... brighter.

Unfortunately for the Hawks, they never regained much of that magic from a season ago. They struggled early, teams weren't surprised by them this year, they only ended up with two players in the All-Star Game (Horford and Paul Millsap), and they were bounced once again in a four-game sweep by the eventual champion Cavaliers. Everyone realized tweaks could happen at the end of the year, they always do, but with an offseason bonanza crop of free agents, no one expected the changes we could and did face.

First, the organization traded Jeff Teague. An All-Star point guard who, at 28 years old, grew into that position over seven seasons in Atlanta and provided terrific balance in the Hawks backcourt. He could play defense, was a better than average passer who could also score on the best of them with his quickness, and developed into one of the top three-point shooters on the team. He was sent to Indiana (for a draft pick) as the position was turned over to the flashy, yet sometimes erratic Dennis Schroder. While there were many who believed Teague's time was done in town, it could be questioned if the move could hurt the Hawks in the years to come because he will see them plenty as the Hawks and Pacers tangle in the East.

With that pick from the Pacers, it was hoped that the Hawks could package their two first-round selections for a move up in this year's Draft to perhaps grab a starter - and maybe future star in last year's Naismith College Player of the Year, Oklahoma's Buddy Hield. Hield, brought box-office, experience (he stayed all four years with the Sooners) and a winner's mentality despite failing in the opening game of this year's Final Four, but unfortunately, Atlanta could not advance any higher up the draft board and was forced to stay in their position of #12 and #21.

The two new draft picks will add support, but exactly how much right away is difficult to determine at this time.

Then came the first reason to hope for really big things next season - the free agent signing of Dwight Howard. The much-maligned Howard, a local product of Southwest Atlanta Christian Academy was coming home after 12 NBA seasons, taking a three-year deal and providing the Hawks with their biggest free agent acquisition since the signing of Hall of Famer Dikembe Mutombo 20 years ago during the 1996 Olympics. Howard brings a lot of baggage to the Hawks, and while he addressed a lot of those concerns during a revealing NBA on TNT "Inside the NBA" interview in May, I'm sure he looking to dispel many of negatives as he hopes to take his hometown team to their first-ever NBA Finals - and his first since his 2009 appearance against the Lakers when he was 23 years old.

Howard is 30 now, and I'm sure he was expecting to be one of the Hawks' "imposing 3" frontline of himself, Horford and Millsap. It would have been interesting on many levels to see how things could have worked, because while there wasn't a "true" three (a small forward) amongst that group, the matchup issues on both ends of the floor would have posed a lot of problems for the opposition. In addition, it would have caused Mike Budenholzer to adjust his "space-and-pace" system, a free-flowing, beautiful style of basketball that would have forced a change with the true center in DH12 (that change will occur now, nonetheless).

The Hawks were confident they could make this work, but what wasn't certain was whether or not Horford would return. Players rarely discuss their free agent status during the regular season, but you know they're thinking about it day after day, and week after week, because there isn't a moment that goes by that they aren't reminded of it. But until they have "the power" to make a decision on their future, the team and its fans are left to wait, and to twist and turn with the latest "sources said" report(s) that brings excitement and consternation.

While I didn't have a solid answer on Horford's decision from the man himself, several items had me feeling like his time in Atlanta and with the Hawks was coming to an end. His name was brought up in trade talks - for Howard, ironically enough - when then-GM Danny Ferry was running things. Trade rumors happen all the time, but for a player who was the most-tenured of anyone on the roster, that had to bother him. While the trade never happened, the season brought numerous questions on Horford's status, and if it made sense for the Hawks to move him at mid-season if they didn't feel he would stay and accept their contract offer at season's end.

I'm not going to debate whether or not the Hawks should have done the deal with Howard first, or solidified things with Horford before doing a deal with Howard, or even keeping Teague; what's done is done, and we can spend all summer on what was the right thing (in the chain of events) to do to make everyone happy. Time will certainly reveal it all in the coming months.

But for now, everyone can only react to what happened Saturday night when Horford tweeted "Celtic Pride" at 7:15 eastern, signaling an end to his years with the Hawks. It was a stunning blow, not only because of the void on the court, but for the team he selected - the aforementioned hated Celtics.

Remember during his rookie season (2008) when the Hawks extended the Celtics to a pesky-seven-game series, Boston viewed it as the best test in a grueling run to their first Finals championship since the mid-1980s. Then, in a rematch four years later, when Atlanta had a great chance to finally dispose of them by having homecourt advantage, they blew it when they lost game 2 of that series, giving the Celtics the advantage and losing in six games. Until we (yes, I still slip into the 'we' train of thought on occasion when it comes to the Hawks) FI-NAL-LY eliminated them this past offseason, I know Horford had to have a sense of pride in sending his chief playoff nemesis home for the summer.

And now, he's become a part of Team Green, leaving a void and hole within the Hawks organization that'll be hard to replace at the present moment. For Budenholzer and GM Wes Wilcox, they have to retool their unit because they've lost a key starter and have nothing to show for it. Gaining Howard is large, it gives the franchise a star, albeit flawed one, who is trying to overcome his polarizing image. If Howard is able to fill the stat sheet like he did during his Orlando days, it may - MAY - be enough to replace the loss of Horford, but if his skills continue to deteriorate, like many believe has happened, then the groans will only get louder on his acquisition.

Finally, while the Horford departure closes a chapter that'll be difficult to match moving forward given the uncertainly that exists, I'm proud to have watched him grow as a person and player, on- and off-the-court, and I'm appreciative of what the Hawks achieved during his years in Atlanta. Sure, I wish we could have gone farther - a good friend of mine will get his first NBA championship ring as a member of the Cavs - and I'm disappointed we didn't, and haven't reached the Finals round in the 40+ years in Atlanta, but Big Al is now a member of the enemy.

My feelings about the Celtics will never change, but I won't 'hate' Horford's decision to join them, he was too good of a friend to use that word against him. I felt that same way when when Johnson left the Hawks, and when Smith and others left as well, but when we faced them, I wished them the best personally, and wanted their new squads to suffer that "L." The same now applies to Horford, and while I'm sure he's already preparing himself for his first encounter against his old mates, he has to know some will be respectful and appreciative of his accomplishments in that Hawks uniform, there will be some who may never forgive him for doing what he did.

It's the nature of sports and our allegiance to our teams, but never forget what he delivered in his nine seasons with the Hawks. You may never see another stretch like Horford's ever again.