Atlanta is the music capital of the South. From country to rap and pop to rock, you can see live music of all genres throughout the metro area. Atlanta is also home to some of the top music historians and connoisseurs in the country. These lovers of music have knowledge that is as diverse as the population in the Atlanta area. Let's take a look at who they area and where you can follow them on social media.
Sean McNally
@Seanemandrums

Sean is the drummer for the Atlanta-based band The Villains. He's also the go-to guy for any questions about the music industry. When not touring with The Villains, Sean is one of the most in-demand session drummers around and writes music every chance he can. He's also a big sports and "Star Wars" fan, so you also get some of that in his Twitter feed. McNally has worked with and knows all the big names in the music industry. He also has plenty of stories to tell. The Villains are one of the hottest new bands in the country, so follow Sean at @Seanemandrums.

V-103 is the No. 1 rated radio station in Atlanta and the No. 1 urban station in the country. There is always something going on at V-103. It might involve on-air personality Ryan Cameron or something happening in the community. Whether promoting the next upcoming event or keeping listeners up to date on the newest contests they can enter, V-103 is your go-to source. Catch the latest music news with constant tweets on everything happening in the area. Check out V-103's website as well for even more music information.

"Sully" is a former DJ, so he knows music. On Twitter, he does talk some music, but if you follow Sully you get so much more. From sports to local Atlanta events to keeping followers updated on the trends and ins and outs of social media, Sully is one-stop shopping. Sully is also active with volunteering his time and efforts to charity, so not only do you learn from one of Atlanta's best minds, you also feel good about yourself. Follow Sully on Twitter at @richsullivan.

There may be no more beloved radio personality in Atlanta than Mara Davis. Mara was the one constant at the always changing 92.9, when it was Z93 and Dave FM. She was on the top of her game when she interviewed the biggest names in music, and Atlanta radio listeners felt like they were having lunch with Mara each day with her "Radio Free Lunch" hour of theme music from the topic of the day. Mara is Atlanta radio and is a must follow on Twitter at @MaraDavis.

Melissa writes about arts and entertainment for the Atlanta Journal-Constitution, in the section that includes music and concerts. She's knowledgeable about all genres of music and her love of music started in her youth. "From the night I walked into the Hollywood Sportatorium – God rest its grimy soul – in Fort Lauderdale for my first ever concert, Van Halen on their 1984 tour, I knew that somehow, some way, I would be involved with music the rest of my life," explains Ruggieri. "Couple that with the fact that the only things I could ever do well were write and play the drums, being a music critic seemed like a custom-made profession!" Keep up to date on Atlanta's music scene by following Melissa.

Jeremy is not just one of the top DJs in Atlanta, he's one one the most in-demand touring DJs in the country. When he's not playing in Atlanta, you can find him setting up shop in Miami, Chicago or Las Vegas. He also plays corporate gigs for Fortune 500 companies. On Twitter at @DJ_Jeremy, he keeps his fans updated on his schedule and he's also a fountain of information when it comes to music and DJ equipment technology. Follow Jeremy now and be prepared to be entertained. 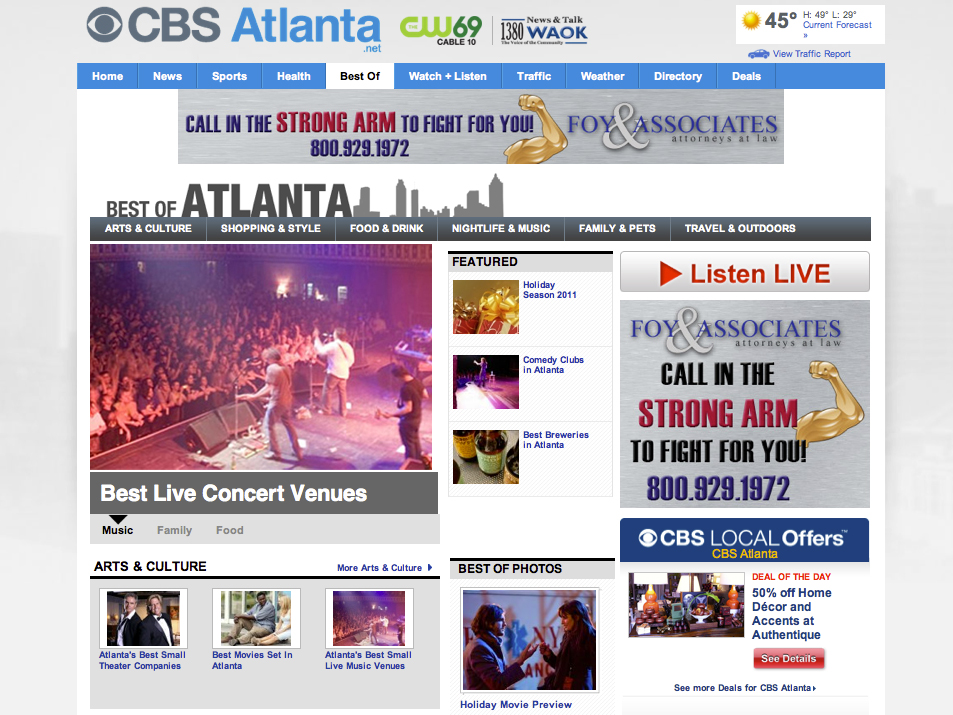 Rick Limpert is a freelance writer/photographer in Atlanta and he loves covering anything Falcons-related. His work can be found at Examiner.com.