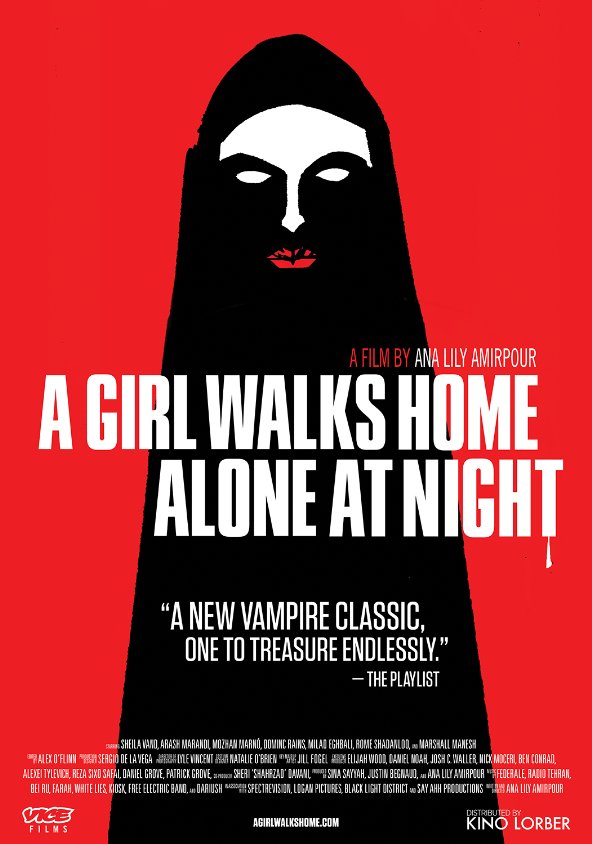 Arash (Arash Marandi) is a young man who is just trying to survive in "Bad City." His father, Hossein(Marshall Manesh), is in mourning, never having gotten over the death of his wife. Hossein is a drug addict, who spends all his time strung out and who owes lots of money to Saeed (Dominic Rains), the local gangster in town. Arash tries to take care of his father, making a living as a gardener for a wealthy family. Saeed makes a visit to their home and takes Arash's prized possession, his car, to pay off some of Hossein's debt.

A mysterious woman (Sheila Vand) suddenly appears in town. She only comes out at night, wandering the streets dressed in a long, flowing black robe. While walking along the streets, she learns about the city's inhabitants, including watching Saeed and how he treats everyone very badly. She accepts a ride from him, going back to his home. You get the feeling that the young woman in black can take her of herself, and Saeed might just be in trouble.

This film is a fascinating take on the vampire movie, with a mix of a modern setting with horror and classic western genres thrown in. It's a beautiful, stylish film, with a black-and-white look that adds to the ambiance. Director of Photography Lyle Vincent's perfectly captures the mood with dark scenes that give the town of Bad City the feeling of doom and gloom. The mysterious woman is constantly bathed in darkness, with only her eyes and the top of her white striped shirt visible as she walks the streets. The sole time we see her without her long, black cape is when she is inside dancing around her room to pop tunes in her modern apartment adorned with colorful pictures of recording artists.

The film has an incredible soundtrack that is very diverse. Current-day pop songs (both Iranian and English) fill the scenes with energy and vibrancy, in direct juxtaposition with the somber setting of Bad City and its inhabitants. At other times, the score is filled with music that belongs in an Italian Spaghetti Western of 1970s. The Sergio Leone style music accompanies a number of confrontations that the mysterious woman has on the dark streets, bringing to mind two gunfighters meeting at high noon.

The screenplay, by the director of the film, Ana Lily Amirpour, favors style over content, and unlike a lot of modern films, in this movie it works. This is a film where dialog is kept to a minimum, making people's actions and reactions paramount. The mysterious woman says almost nothing throughout the film, telling us more with her expressive eyes than her voice.

Director Amirpour uses lots of long, static shots, often letting the shadows of the characters play along the walls of the city. Amirpour does a masterful job of camera placement throughout the film, making us feel a part of the grimy and soulless city. This oppressive, dark atmosphere is evident throughout the film, and Amirpour uses it to her full advantage as we get the idea that no one is going to get out of Bad City alive.

She also gets the most out of her cast, especially the wonderful and talented Sheila Vand as the mysterious woman in black. Vand is perfect in the role; you can feel the power and the confidence of her character emanating off the screen. She has great chemistry with Arash Marandi, and you can see their attraction to each right from the start. Marandi has the look of James Dean but has the vulnerability of someone much younger, making his character seem rather unsure of himself at times. His scenes with Vand are the highlight of the film as they carry out their back and forth courtship. Dominic Rains makes an excellent bad guy, playing a thug who will mess with the townspeople just to get his jollies. His mixture of cocksureness, tattoos, and muscle, give off a menace that dominates the scenes he is in.

"A Girl Who Walks Home Alone at Night" is a unique film that mixes genres to create its own film style. That style comes from writer/director Ana Lily Amirpour, who gives us a terrific feature film debut. She will be someone we will be talking about for years down the road. This one of those movies that will get better with repeated viewings due to its rich texture and a soundtrack that quickly became one of my favorites of the past five years. It's not your typical Vampire film and because of that, it's a much richer and interesting viewing experience.     My Rating: I Would Pay to See it Again

For more of Mike's Reviews and Interviews click here