Up until 2013, if you wanted to party with 120,000+ other people outdoors to your favorite DJs under the most elaborately decorated stages and tents in the world, you had to travel to Boom, Belgium.  While that sounds awesome, and remains on my bucketlist, it isn't exactly doable for many.  Last year, the rave gods smiled upon Chattahoochee Hills, Georgia and the curators of Europe's TomorrowLand brought TomorrowWorld to the USA.

I attended the inaugural TomorrowWorld, so as a "Pioneer," as the fest calls it, here are 6 reasons why you should be joining the madness this September: 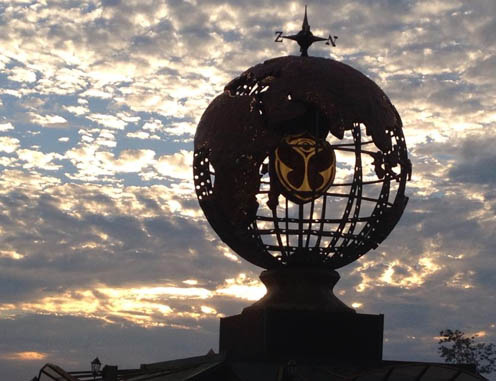 Just minutes outside the city and easily reachable from the Atlanta airport, this plot of barely touched land is prime real estate for you and 119,999 of your newest best friends to rage for four days straight.  Rolling hills, lush lawns and vast lakes are just a few of the geographic characteristics of where TomorrowWorld takes place.  These picturesque surroundings don't just serve as a background for the festival, either.  Rather, while getting around to different stages, you traverse the landscape through the woods and over bridges constructed just for TomorrowWorld.

To get a taste of what you're in for when you visit this spot, check out last year's aftermovie: 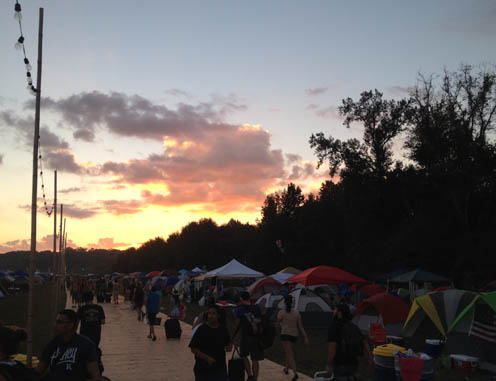 There are plenty of lodging options for outdoor music festivals, but if you're doing it right, you're camping!  Once fest goers pour through the gates and get set up, what you're left with is a tent village spanning every direction as far as the eye can see.  Everything about TomorrowWorld is an immersive experience.  While you can certainly head back to your vehicle to make a run to the store to stock up on sunscreen, there are no vehicles in the campgrounds.  This is a stark difference to most camping festivals, and while hauling all your gear from the parking area to the campground can be daunting, the general consensus in 2013 was that the lack of cars made the experience that much more memorable.  When you come to TomorrowWorld--you are IN TomorrowWorld!

Running through the middle of Dreamville is a wooden boardwalk leading to the festival entrances.  Along the way you'll pass information booths that sell breakfast in the mornings and pass out the daily TomorrowWorld newspaper!  Coffee shops are plentiful in the campgrounds, so if you're a caffeine fiend like me, worry not.  Food vending, lockers, showers and even a salon are all only a few yards away from anywhere in Dreamville.  Not exactly roughing it! 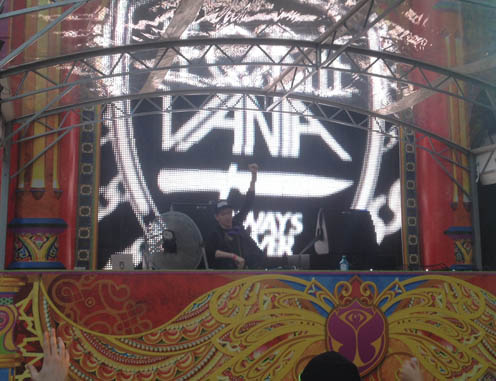 In 2013, TomorrowWorld realized that Georgia's electronic music scene shouldn't be neglected in the line-up.  Sets from Always Never bossman/mau5trap artist Le Castle Vania along with Bro Safari, Treasure Fingers, Speakerfoxxx and Heroes x Villains filled Chattahoochee Hills with the sounds of Atlanta's finest underground.  With 2014's initial line-up announcement, it seems like TomorrowWorld will once again welcome some tunes from the ATL.  Fingers crossed for Le Castle Vania on the mainstage this year! 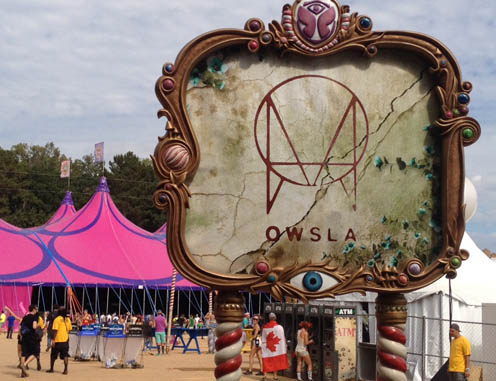 2014 marks the return of the Owsla-curated stage to TomorrowWorld.  Not gonna lie, I spent most of the day on Sunday at this tent last year.  Sets from Kill the Noise, Seven Lions, Kill Paris and Alvin Risk were standout performances from TomorrowWorld's inaugural year.  This year, Owsla boss Skrillex will be on the mainstage dropping tracks from his new record Recess, and we can only assume that he's got quite an arsenal of label mates ready to kill it. 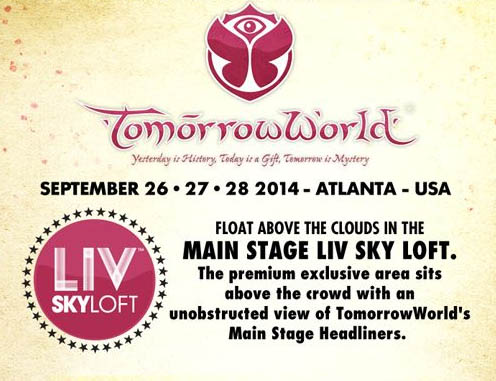 Let's say, hypothetically, that you're not into the whole camping thing.  That's fine, no one will judge you!  TomorrowWorld has a ton of options for a more comfortable festival-going experience.  From Easy Tents to Comfort packages, you'll be well taken care of in Chattahoochee Hills.  Maybe the real cherry on top is the Sky Loft VIP experience hosted by LIV Nightclub.  The loft is on a hill overlooking the mainstage, so you'll have an unobstructed view of Bassnectar, Kaskade, Skrillex and the rest of the headliners.

Check out your options for VIP add-ons here. 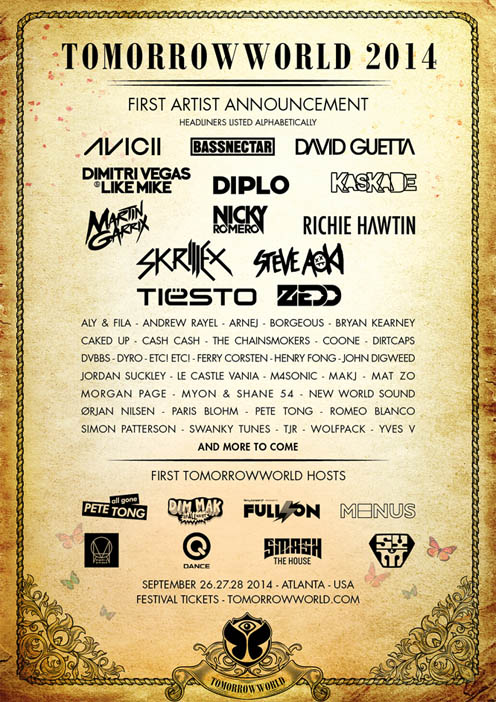 ...and we thought we were spoiled last year!  Whether you're into prog house, dubstep, trance, hardstyle or trap, TomorrowWorld has you covered.  Not only is the mainstage stacked with headliners from all over the globe, stages curated by Pete Tong, Steve Aoki's Dam Mak Records, Ferry Corsten's Full On and Q Dance will allow you to sink into a steady groove for hours into the night.

Keep an eye out for line-up announcements and pick up tickets here.

Kurt is a TomorrowWorld pioneer.  He will gladly show you around Dreamville and let you in on which food vendors have vegetarian friendly options!  Hit him up on Twitter @theactualkurt