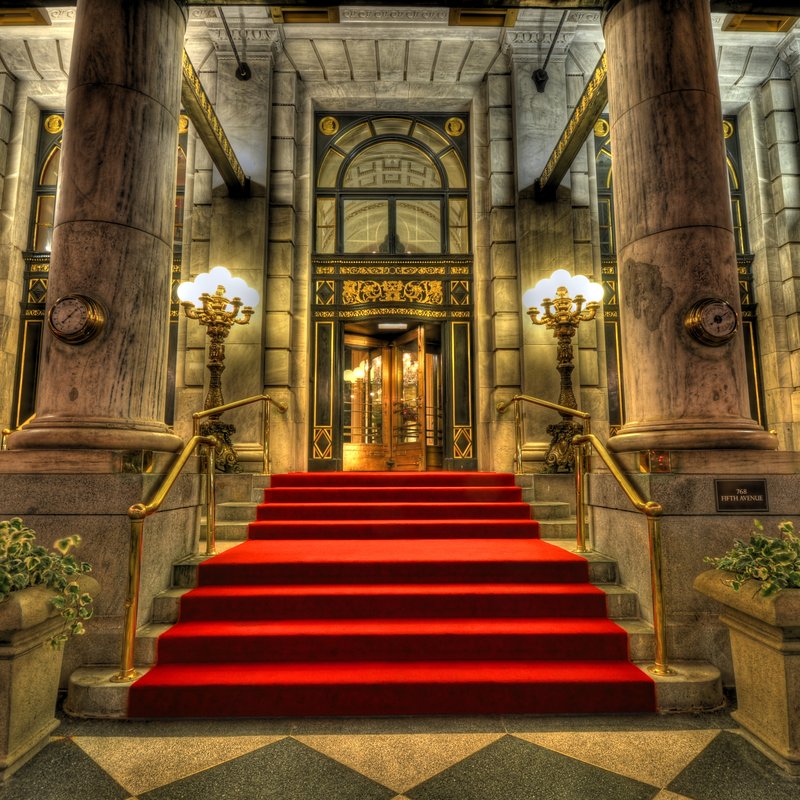 Because sleeping somewhere steeped in history, rife with tales of illegal liquor and fountain-frolicking, where famous actors, presidents, and royals have checked in (and where some dead celebs refuse to check out) is almost always preferable to staying in one of these joints, we've put together a guide to 10 of the world's most storied hotels. 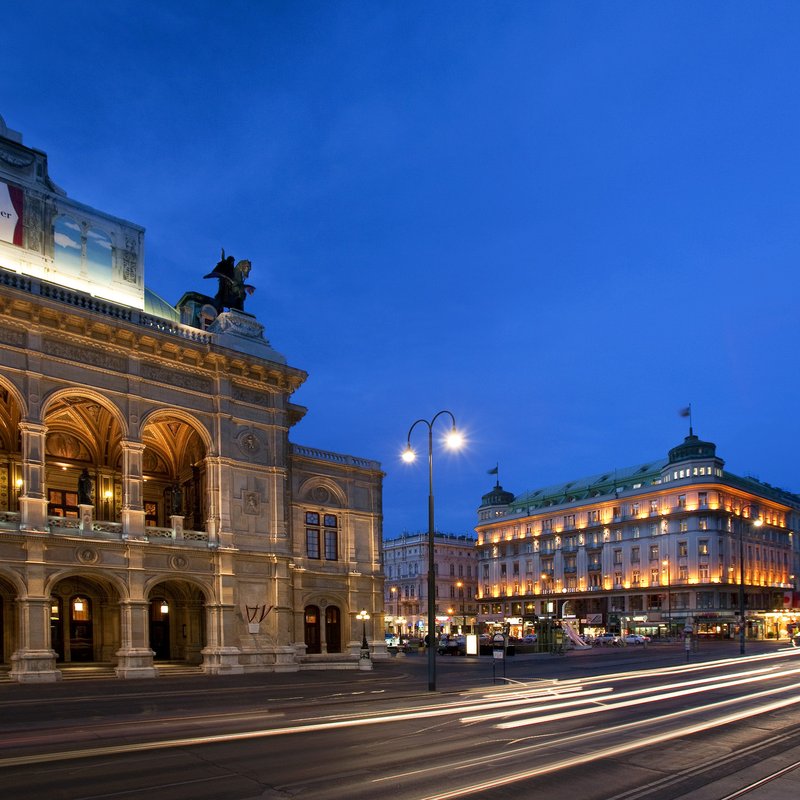 Related:Score Cheap Hotel Rooms By Letting Hotels Fight Over You

Hotel Bristol, Vienna
Opened: 1892
Why it's famous: Steeped in regal legacy, it was in the Hotel Bristol's fanciest accommodation, the Prince of Wales Suite, that -- you guessed it -- the Prince of Wales lived for a time with Wallis Simpson, the woman for whom he abdicated the throne. An artists' haven (due in part to its proximity to the city's State Opera), the Bristol's hosted pianist Arthur Rubinstein and composer Giacomo Puccini, and George Gershwin stayed here to work on the score for An American in Paris.
Fun fact: There's a painting of Bambi on one of the hotel's cellar walls, because -- you guessed it (again!) -- the story was written here. Bambi author Felix Salten also met Richard Simon (of Simon and Schuster) in the hotel's restaurant to discuss publishing the book. 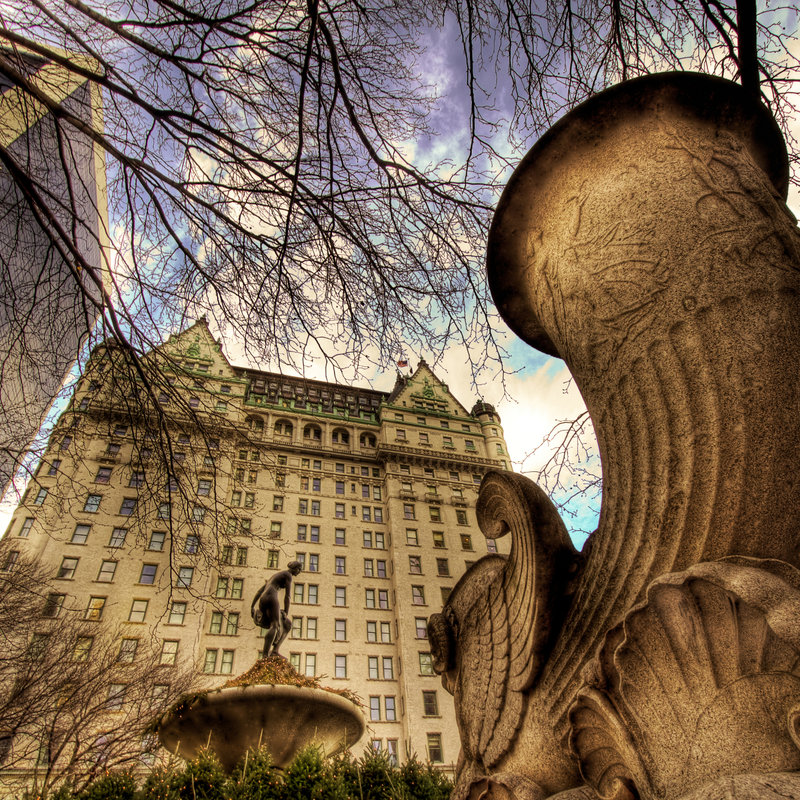 The Plaza, NYC
Opened: 1907
Why it's famous: This 20-story hotel off Central Park was recognized as a NYC landmark in 1969, and is as much a part of the city's fictional history as its real one. Not only did it snag a cameo in last year's film rendition of The Great Gatsby, but F. Scott Fitzgerald actually lived there once. Yep, and among his and Zelda's many frolics, they enjoyed a midnight swim in the hotel's fountain. Today, you can stay in the Art Deco-styled Fitzgerald Suite, appropriately furnished with photos of Leonardo DiCaprio and Carey Mulligan.
Fun fact: Alfred Hitchcock's North by Northwest (1959) was the first film to be shot there. 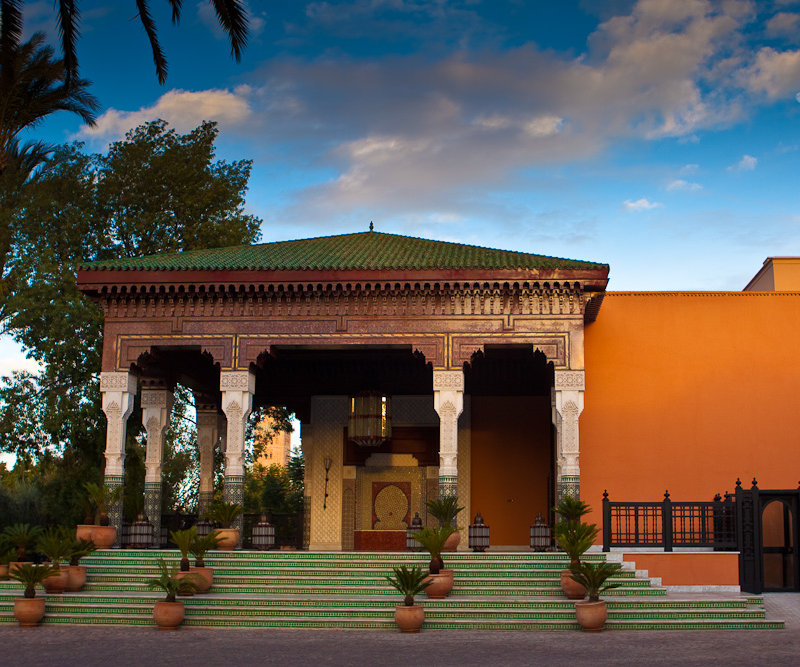 La Mamounia, Marrakesh, Morocco
Opened: 1923
Why it's famous: The guestbook at La Mamounia reads like a Who's Who of Hollywood: Marlene Dietrich, Tom Cruise, Kate Winslet, and Charlton Heston, not to mention Alfred Hitchcock -- who was reportedly something of an iconic hotel butterfly, and filmed The Man Who Knew Too Much there in the mid-'50s. Also a favorite of dignitaries, presidents, and prime ministers, La Mamounia once hosted a meeting between FDR and Winston Churchill, who referred to the hotel as the world's "most lovely spot".
Fun fact: Vlad Putin's daughter was married at the hotel last year; guests walked away with these party gifts.

Chloe Pantazi is an editorial assistant on Thrillist's travel team. She once stupidly spontaneously treated herself to cocktails at the Ritz; for how much her drink cost, it wasn't nearly strong enough. Follow her on Twitter at @ChloePantazi. 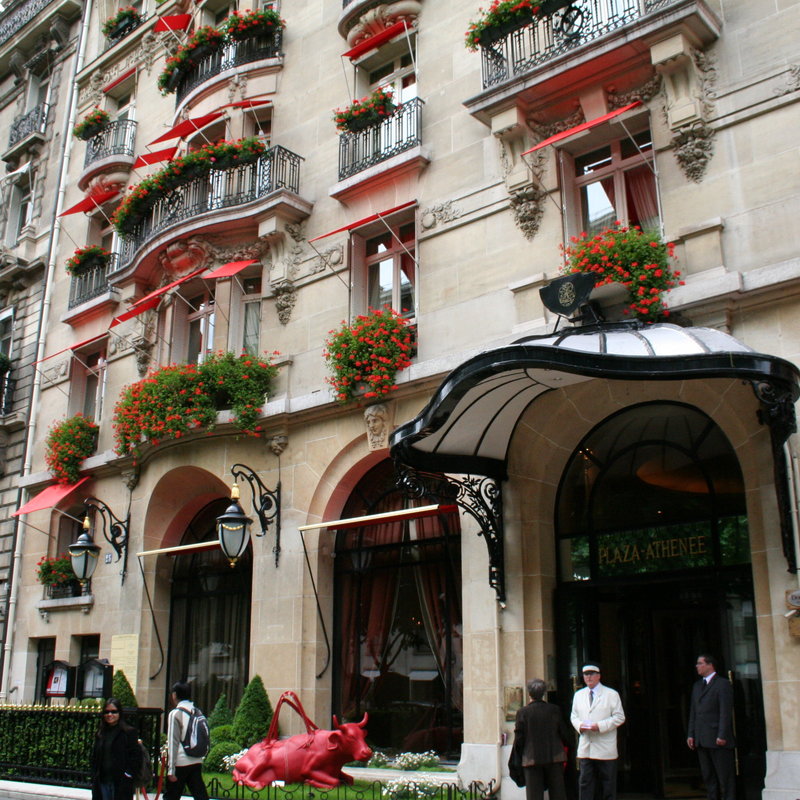 Hotel Plaza Athénée, Paris
Opened: 1911
Why it's famous: It's where the Sex and the City finale was filmed, obviously. JK. No, really, the Plaza Athenee occupies prime real estate near the Champs-Élysées and the Eiffel Tower (which you can see from the hotel's Eiffel Suites) and has played host to a long line of celebrity guests, from Grace Kelly, Gary Cooper, and Rudolph Valentino to Rihanna, Stevie Wonder, and Johnny Depp. In 1937 American soldiers took over Le Relais, the hotel's dining room, and used it as their cafeteria.
Fun fact: A longtime stomping ground of the Parisian fashion industry, the Plaza Athenee was Christian Dior's go-to spot for photo shoots. Also, they filmed the Smurfs 2 there. 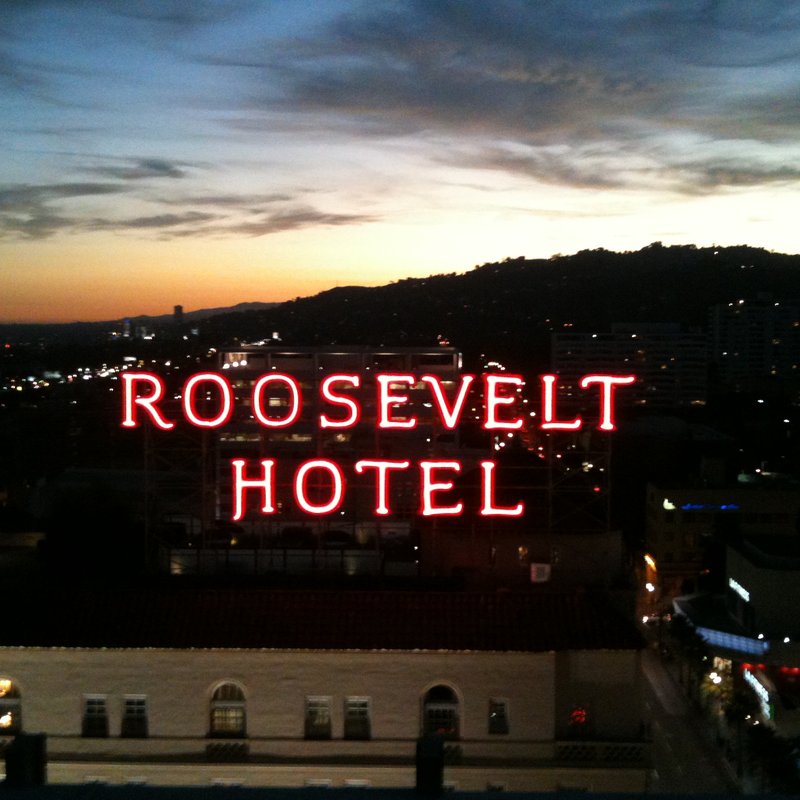 Hollywood Roosevelt, LA
Opened: 1927
Why it's famous: For its dead celebrities -- Clark Gable and Carole Lombard are both rumored to haunt the place, as is Marilyn Monroe, whose ghost apparently lurks in one of the hotel's mirrors and by the pool. Marilyn Monroe's ghost, apparently still trying to get a tan.
Fun fact: Errol Flynn (another alleged hotel ghoul) purportedly used the Roosevelt's barber shop to make bathtub gin during the Prohibition era. 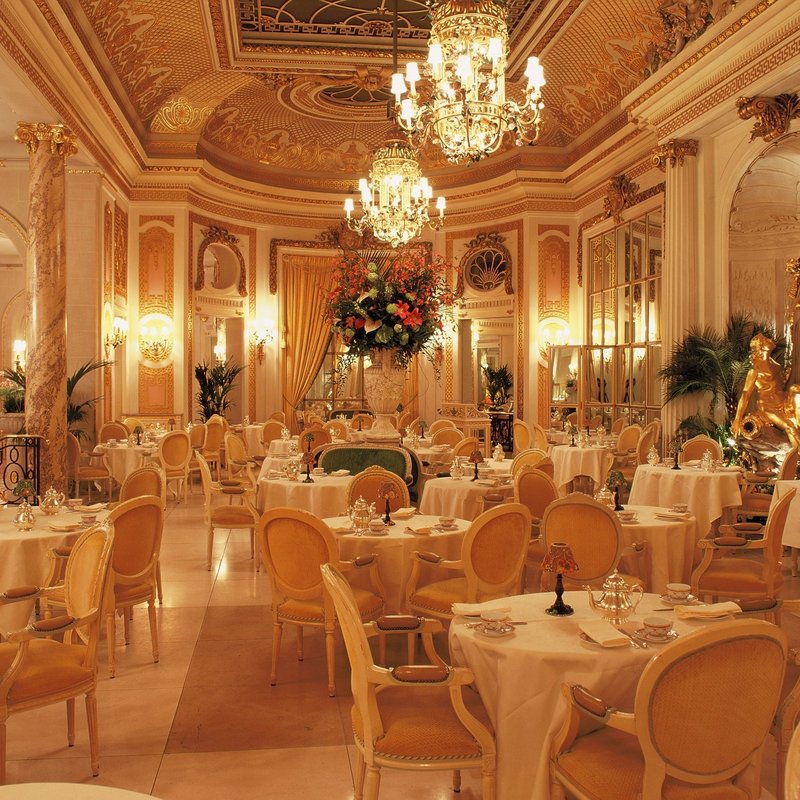 The Ritz, London
Opened: 1906
Why it's famous: Other than its appearance in Notting Hill w/ Hugh Grant and Julia Roberts, of course, the Ritz was the first of London's steel-frame structures. Designed by architects Charles Mewés and Arthur Davis, it stands in the city's exclusive Piccadilly area. During WWII, the hotel's Marie Antoinette Suite served as a rendezvous spot for Eisenhower, Churchill, and de Gaulle.
Fun fact: When Charlie Chaplin stayed at the Ritz, he needed an entourage of 40 policemen just to get through the huddle of fans outside. 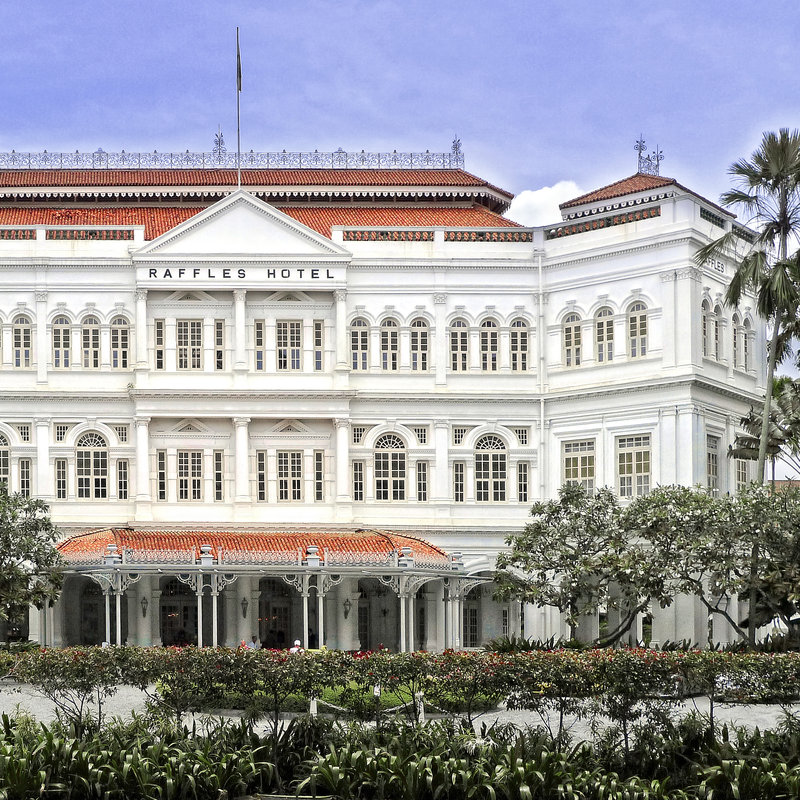 Raffles, Singapore
Opened: 1887
Why it's famous: For being the birthplace of the famed cocktail, the Singapore Sling. It was concocted in 1915 by mixologist Ngiam Tong Boon at the hotel's Long Bar, and was a favorite of Ernest Hemingway, Rudyard Kipling, Joseph Conrad, and Alfred Hitchcock. 100 years after its opening, Raffles was recognized as a National Monument.
Fun facts: As WWII drew to a close, Raffles -- for a spell called Syonan Ryokan due to Japan's occupation of Singapore -- housed prisoners of war; the hotel's current name comes from the unfortunately named British colonial Stamford Raffles. 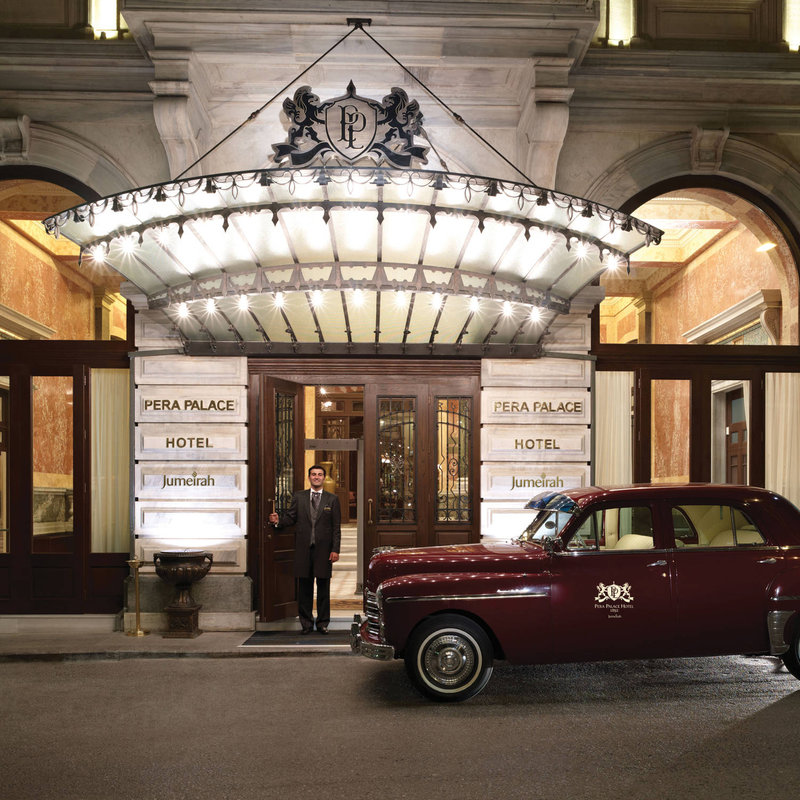 The Pera Palace, Istanbul
Opened: 1892
Why it's famous: You mean other than the fact that there five separate suites named after Ernest Hemingway (the Pera Palace is featured in his short story The Snows of Kilimanjaro)? Elsewhere in fiction, characters in Graham Greene's Travels With My Aunt stay at the hotel.
Fun fact(s): On its opening, the hotel catered to passengers on the Orient Express -- inspiring loyal customer Agatha Christie to pen Murder on the Orient Express. 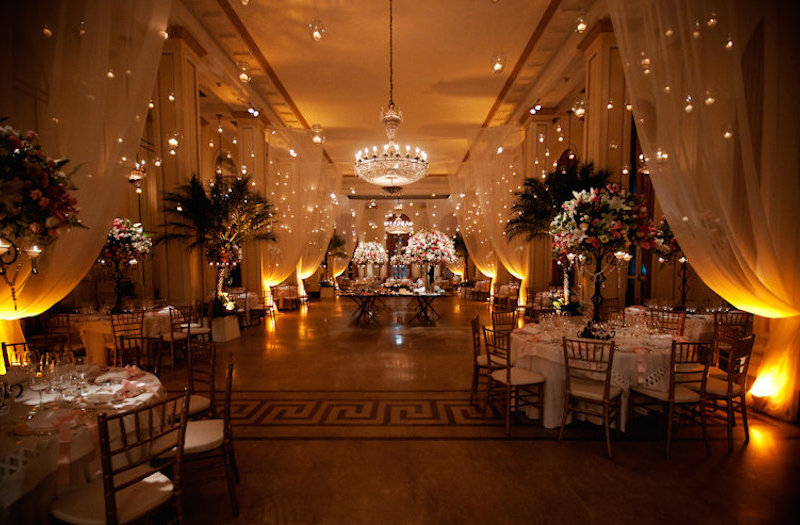 Belmond Copacabana Palace, Rio de Janeiro
Opened: 1923, at the behest of Brazil's president Epitácio Pessoa; it was originally slated to open a year earlier, to coincide with the centennial celebration of Brazil's independence.
Why it's famous: In addition to hosting too many A-listers to... well, list (Princess Di, Michael Jackson, Walt Disney), renowned musicians like Ella Fitzgerald, Ray Charles, and Nat King Cole have played the hotel's club, The Golden Room. Orson Welles resided there while shooting It's All True, and the movie Flying Down to Rio (1933) starring Fred Astaire and Ginger Rogers was filmed on site.
Fun fact: A chat at the Palace between Barry Manilow and his pal Bruce Sussman reportedly inspired Manilow's hit song, "Copacabana". 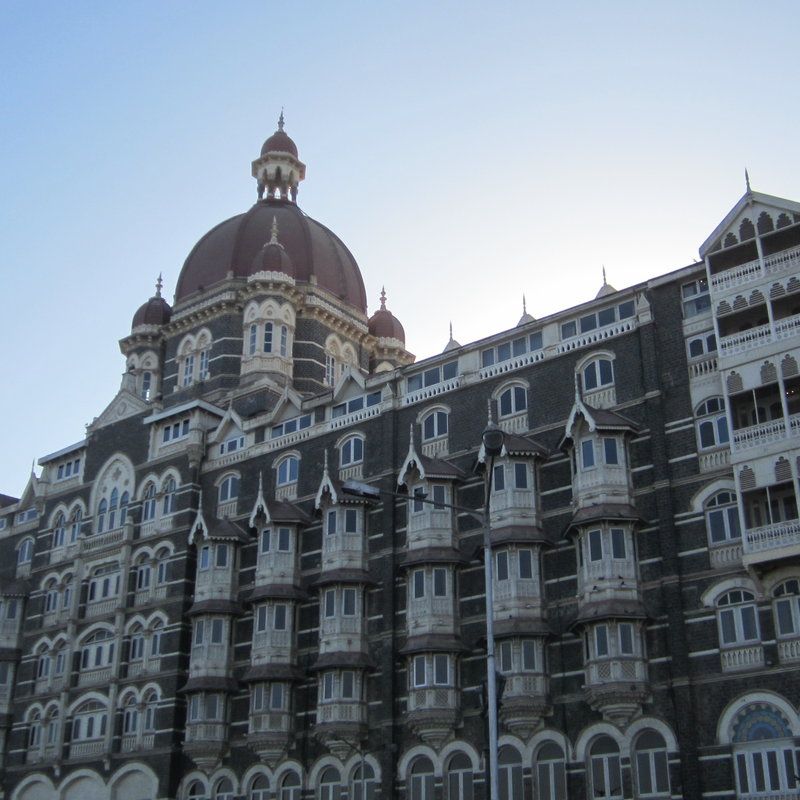 Taj Mahal Palace, Mumbai
Opened: 1903
Why it's famous: Built at the turn of the century, the Taj Mahal Palace was India's first hotel to use a steam elevator. Which totally came in handy during WWI, when the hotel was transformed into a 600-bed hospital. Despite suffering a terrorist attack in 2008, the hotel remains a vacay retreat for royals and celebrities alike (Prince Charles, Brangelina, etc), and President Obama reportedly rented out the whole place on his visit to India in 2010.
Fun fact: The hotel's Harbour Bar was Mumbai's first licensed bar. 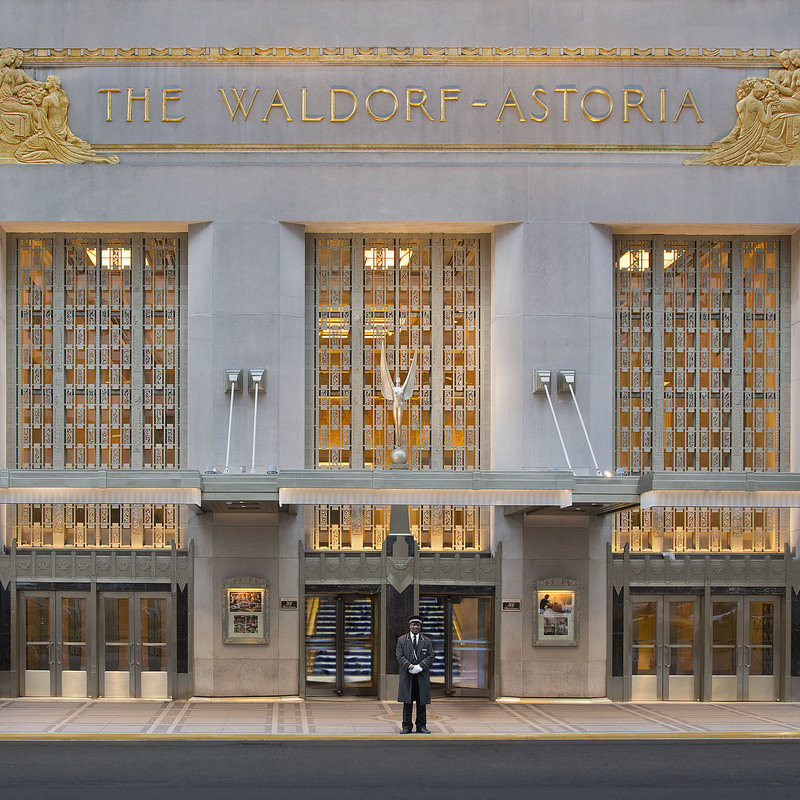 Waldorf-Astoria, NYC
Opened: 1893 if you count the original hotel, which was opened by William Waldorf Astor on Fifth Avenue and 33rd Street and later demolished; the Empire State Building took its spot in 1929.
Why it's famous: When the current Waldorf-Astoria moved into its Park Avenue home in 1931, it was the world's tallest hotel; though it no longer lays claim to the title, the hotel was registered as a NYC landmark in 1993. Also, the WA's long been a favorite of America's power players: every president has stayed there, from Hoover to Obama, and its Presidential Suite boasts bulletproof windows. And speaking of presidents and beds, in 1955 Marilyn Monroe paid $1K a week to live in one of the hotel's suites.
Fun fact: Most New Yorkers know about the salad named after the hotel, but few know about the "secret" train platform underneath the hotel; Track 61 was used by high-security guests such as FDR. While the platform no longer operates and remains out of bounds to the public, it has been opened under special circumstances (Andy Warhol held an exhibit there in 1965).