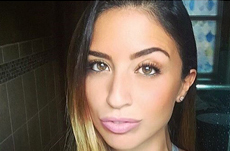 NEW YORK -- With a DNA profile but no suspect to match in the strangling of a woman who went for a run and met a killer, authorities are looking to an emerging approach: using the DNA to look for the killer’s relatives.

The technique, known as familial DNA searching, has made inroads in some U.S. states and other countries in the last decade, leading to both high-profile arrests and civil-liberties qualms.

Now, New York state officials plan to discuss Friday whether to introduce it after a request from prosecutors and police yearning for a lead in the case of 30-year-old runner Karina Vetrano.

Authorities see the technique as a powerful, precise investigative tool. And to Vetrano’s family, the case for the search is clear.

“Our only goal in life is to find out who did this to our daughter,” said her mother, Cathy Vetrano. “So if there’s any method available to do that, we want it done.”

But critics view the technique as a DNA dragnet that can single out otherwise law-abiding people for scrutiny because of family ties.

“A policy that implicates New Yorkers in a criminal investigation solely because they are related to someone with DNA in the state’s databank is a miscarriage of justice,” said Donna Lieberman, the New York Civil Liberties Union’s executive director.

Ten states, including California, Texas and Florida, conduct familial DNA testing. Ohio on Monday announced its first effort yielded an arrest in the kidnapping and rape of a 6-year-old girl and the attempted abduction of a 10-year-old girl.

But at least two jurisdictions, Maryland and the District of Columbia, have prohibited the practice.

Investigators can then explore whether such people have family members who fits as suspects. If so, they need other evidence, possibly a match to a suspect’s own DNA, to bring charges.

Familial DNA famously led to an arrest in Los Angeles’“Grim Sleeper” serial killings, which spanned from 1985 to 2007. Lonnie Franklin Jr. was convicted and sentenced to death this year.

After Vetrano’s beaten body was found Aug. 2 in a marshy park in her quiet Queens neighborhood, investigators developed a DNA profile of the probable attacker from material under Vetrano’s fingernails and on her neck and phone, but it didn’t match anyone in law enforcement DNA databases.

Meanwhile, police chased down 85 tips, interviewed runners, looked for clues in Vetrano’s personal life and examined surveillance video and even panhandling reports from areas nearby.

Commissioners intend to discuss the topic at a meeting Friday. It’s not clear when or what they’ll decide, but spokeswoman Janine Kava said Thursday they’ll continue working to provide law enforcement with “cutting-edge tools” to solve crimes “without compromising individual protections.”

Concerns about familial DNA searching hit home for New Orleans filmmaker Michael Usry in 2014, when police showed up with a warrant to get his DNA as a possible suspect in a 1996 killing in Idaho.

A crime scene DNA sample was similar to that of Usry’s father, who’d voluntarily given it for a nonprofit genealogy project; police had gotten the data from a website that acquired it. The baffled filmmaker spent a month worrying about what would happen before further testing cleared him.

“It was a very weird situation,” he said earlier this year.

“We don’t subject some people to disparate treatment because of taint of blood,” says Erin Murphy, a New York University law professor who has studied the issue. “It’s a violation of some of our foundational principles.”

Supporters say familial DNA investigations can be structured to pursue only strong leads and do it discreetly. California, for instance, strives to investigate them without letting on to the potential suspects or their family members.

Cathy Vetrano has her own assessment.

“If any person who thinks it’s unfair was in this situation,” she says, “I think they would be feeling differently.”