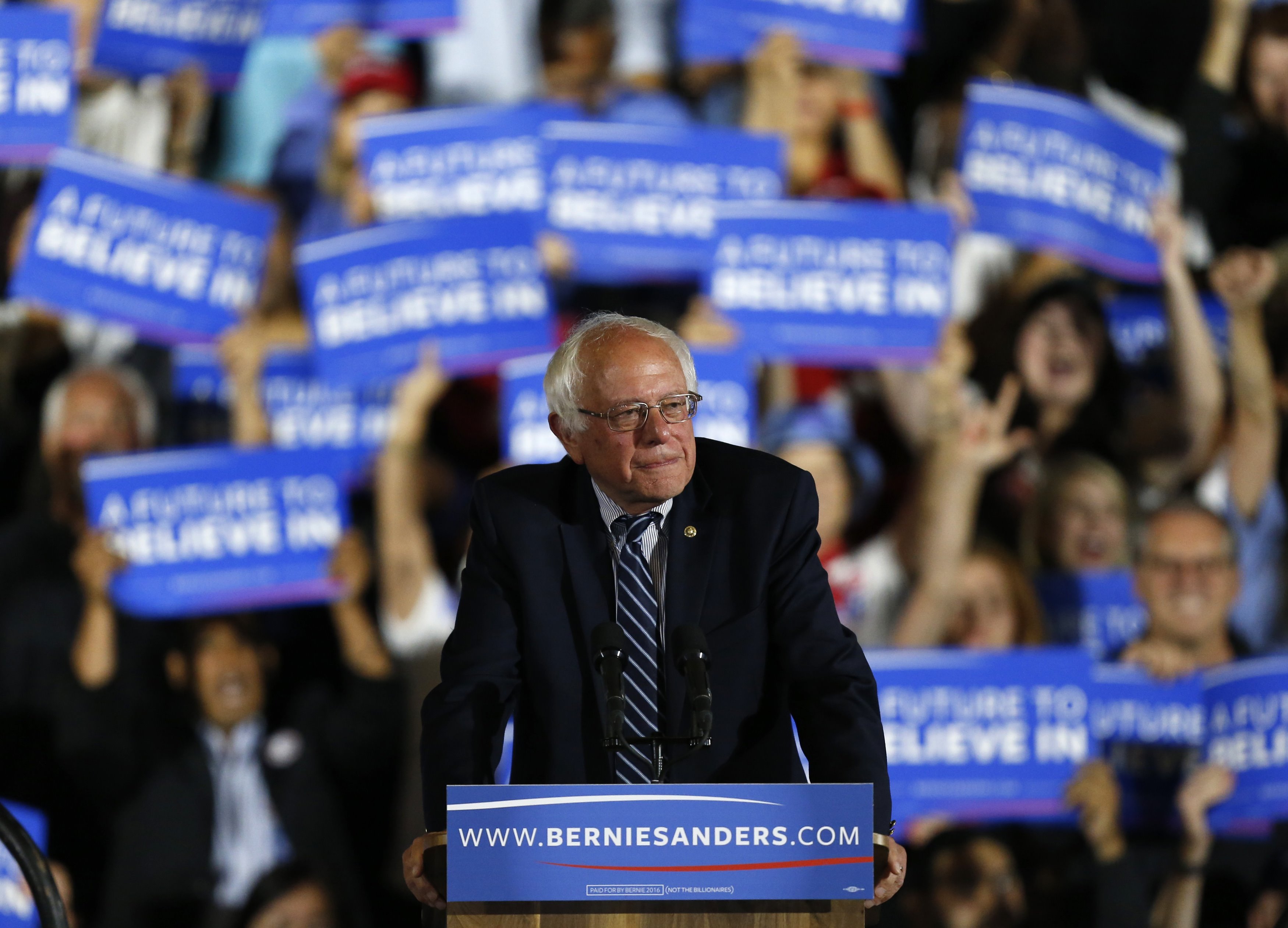 Eight years ago, after the final votes were cast and then-Sen. Barack Obama had clinched the nomination one night in early June, it took Hillary Clinton four days to concede the race.

On Tuesday night, when this time it was Clinton who earned the delegates to secure her party's nod, Vermont Sen. Bernie Sanders vowed in a speech to fight on--at the same time he and his campaign are making behind-the-scenes moves that suggest they're aware the race is effectively over.

Speaking to supporters in Santa Monica, Calif., Bernie had one message: "The struggle continues!"

Still, he struck a somewhat more conciliatory tone than he has in recent speeches, urging his supporters "to understand that we are in this together." He did not attack Clinton: the only time he mentioned her during his briefer-than-usual remarks was to note that he had spoken with her to congratulate her on her Tuesday victories.

With results still coming in, it was clear Sanders had a poorer-than-expected showing overall: as of early Wednesday morning, Clinton led by more than 20 points in California despite recent polling showing a margin-of-error race. She also picked up victories in South Dakota and New Mexico despite Sanders' efforts there, and won by a large margin in New Jersey. Sanders won in Montana and North Dakota.

Sanders' speech came shortly after the White House announced he spoke by phone with President Obama on Tuesday, and said in a statement that the two will meet at the White House on Thursday. The meeting was "at Senator Sanders' request," press secretary Josh Earnest wrote. Sanders will also meet with Senate Minority Leader Harry Reid--who has endorsed Clinton in the race--on Thursday as well.

The White House statement also made clear that Mr. Obama acknowledged Clinton's delegate victory. "The President congratulated Secretary Clinton for securing the delegates necessary to clinch the Democratic Nomination for President," it read. "Her historic campaign inspired millions and is an extension of her lifelong fight for middle-class families and children."

Were Mr. Obama to endorse Clinton, as he is likely to do as early as this week, it would be a clear sign that the Democratic race is over.

Still, as Clinton was speaking in Brooklyn, Sanders' campaign made it clear he isn't done. They sent out a release shortly after she finished announcing he'd appear at a Thursday campaign rally in D.C.--the final state on on the calendar, which holds its Democratic primary next Tuesday.

The conflicting moves are reflective of the internal divisions within Sanders' campaign overall: some on staff have been bullish about his intentions to continue the fight to Philadelphia, while others have taken a softer tone.

That's been the case for a while. Back before the Northeast primaries on April 26, for example, campaign manager Jeff Weaver was saying Sanders would fight on through the convention. Chief strategist Tad Devine, however, said Sanders would need to "reassess" things after the results came in.

Some changes, at least, are imminent: the New York Times reported Tuesday night that Sanders is laying off approximately half of his campaign staff Wednesday. CBS News' Kylie Atwood confirmed that among them are at least a dozen advance staffers, who are upset but have known this was coming for weeks.

In her speech in Brooklyn, Clinton made a fairly explicit pitch to Sanders voters, acknowledging the contributions Sanders has made to key Democratic Party policies.

"He has spent his long career in public service fighting for progressive causes and principles and he's excited millions of voters, especially young people," she said. "And let there be no mistake: Sen. Sanders, his campaign, and the vigorous debate that we've had about how to raise incomes, reduce inequality, increase upward mobility have been very good for the Democratic Party and for America."

Clinton continued, asking that people "remember what unites us."

"This has been a hard fought deeply felt campaign," she said. "But whether you supported me, or Senator Sanders, or one of the Republicans, we all need to keep working towards a better, fairer, stronger America."

She nodded to the 2008 race when addressing Sanders supporters Tuesday night, saying she knows "it never feels good to put your heart into a cause, or a candidate you believe in, and to come up short."

"I know that feeling well," she said, to laughs from the audience.

On June 3, 2008, the last big primary night that year and the night when Mr. Obama mathematically clinched the nomination, Clinton, too, refrained from announcing anything major that night: "I will be making no decisions tonight."

"A lot of people are asking, 'What does Hillary want?' she said at the time. "I want what I have always fought for: I want the nearly 18 million people who voted for me to be respected and heard."

That year, Sanders himself endorsed Mr. Obama on June 5, two days after he clinched the nomination, noting that he would "do everything I can" to help the then-Illinois senator.

"Sanders said he held off supporting either of the Democrats [Obama or Clinton] because he has made it a custom not to support any Democrat for the presidential nomination until the party had chosen its nominee," the Burlington Free Press wrote at the time.

For Sanders, that same pressure began building before the polls even closed in California: on Tuesday morning, House Minority Leader Nancy Pelosi backed Clinton after remaining neutral throughout the primaries.

"I'm a voter in California, and I have voted for Hillary Clinton for president of the United States and proud to endorse her for that position," she said on ABC's "Good Morning America." (Still, she added, since California had yet to vote: "I hasten to say that it's not over until it's over.")